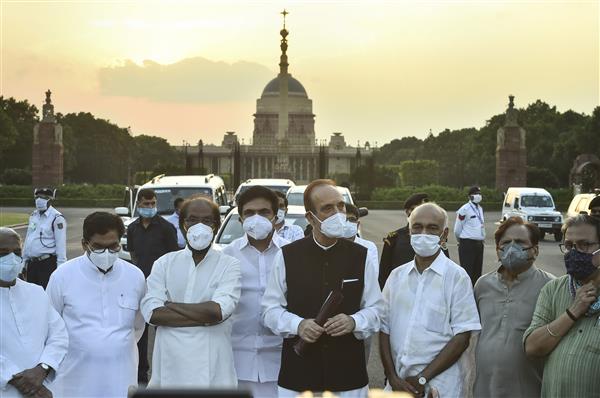 The broader Opposition on Wednesday urged President Ram Nath Kovind to return the “unconstitutional” farm-related Bills, requesting him to reserve his assent on the legislations till the time these were reconsidered and taken up again through due process.

In a meeting with the President on Wednesday evening, Leader of Opposition Ghulam Nabi Azad, speaking for 18 non-NDA parties, alleged that the Bills were passed by the Rajya Sabha in violation of all parliamentary and constitutional rules and procedures with no voting or division allowed on the resolutions and motions moved by Opposition members.

“All limits were crossed in the Rajya Sabha on Sunday and Constitutional rules, regulations and procedures were disregarded in the temple of democracy. The way Deputy Chairman passed the Bills, we moved the motion of no confidence against him.

The meeting was only granted to Azad in view of COVID norms.

The Opposition featuring 18 party leaders had submitted a memorandum against farm Bills to the President earlier. The submission was followed up today with a meeting with the President.

The President said he will look into our concerns, said Azad, apprising the President of the “manner in which the Bills were passed.”

Azad said farmers were the backbone of India and filled the granaries.

“This government should have struck a broad consensus on the Bills, spoken to all parties and farmer organisations before bringing a law. Then the law would have been. But sadly the government did not send the Bill either to a select committee or a standing committee,” the Congress veteran noted.

Recalling Sunday events in the Rajya Sabha, Azad said five parties had moved resolutions and two had moved motions to send the Bills to a select or standing committee.

That didn’t happen, he said, leading to a representation by the Opposition to the President. Azad said the consensus on Sunday in the Rajya Sabha was to not extend the house sitting beyond 1 pm but the same was “disregarded.”

“The Opposition is not responsible for the fracas that ensued in RS. The government is responsible.

Unfortunately, the Deputy Chairman passed the Bills without hearing the Opposition. We didn’t know what was going on,” said Azad.

Earlier today, Opposition MPs held a march from Mahatma Gandhi statue to Ambedkar statue inside Parliament House to protest farm Bills and labour Bills passed in the absence of the Opposition.

Congress chief whip in the Rajya Sabha Jairam Ramesh said, “All MPs of the Congress and like-minded parties protested anti-farmers, anti-workers Bills that have been rubberstamped in Parliament in the most undemocratic manner by the Modi government.”