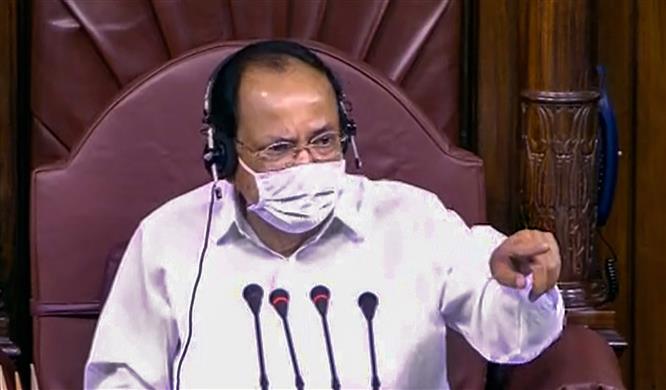 The government on Tuesday committed in the Rajya Sabha that it was ready for the extension of time to further discuss farm-related bills and also the division of votes on condition that the suspended members expressed regret about their conduct.

Responding to Leader of the Opposition Ghulam Nabi Azad, Parliamentary Affairs Minister Pralhad Joshi said the government had comfortable numbers in the House with 110 against 72 member opposing Bills when they were passed.

Azad said the Opposition will boycott the House for the remaining period the Monsoon Session till the suspension of the members were revoked, and a fresh Bill ensuing that agriculture produce will be purchased by private parties and government agencies at MSP rates were brought in the House.

Rebutting the allegation that time was not extended, Joshi said the members resorted to uncalled for aggression no sooner than he had concurred for extension of time.

The Deputy Chairman, Harivansh Singh, had also agreed to allow division of votes provided the members go to their respective seats and restore order.

Leader of the House Thaawarchand Gehlot condemned the behaviour of the suspended members.

Joshi expressed concern at Azad for justifying the unruly conduct of the eight members of the opposition parties for their unruly conduct by “laying the blame on the chair”.

He appealed to the members to express regret for their conduct as it was in the interest of all that the House should function.

Azad said the behaviour of the members, though improper, was an expression of the pent-up feeling of Opposition on being not allowed sufficient time to express their views.

He said the division of votes on the Bills was not allowed by the Deputy Chairman Harivansh Singh, who was presiding the proceedings.

He said the discussion should have been extended to discuss the Bills, as had been asked for by the Opposition.

Azad wondered at the hurry displayed by the government to pass the Bills, and also expressed doubt if it had sufficient numbers to face division of votes.

In order to diffuse the situation, former Prime Minister HD Devegowda among other leaders urged that way should be found to break the logjam.

House Chairman Vekaiah Naidu also expressed concern at the developments that it had hurt the image of the House.

He said he was ready to consider the action taken against the members provided they express regret for the conduct.

“They are our own members,” Naidu said, regretting the Opposition action of blaming the Chair for the impasse.

He further said Singh has also undertaken one-day fast in a wish for the welfare of democracy.

The Opposition remained unrelenting and boycotted the House.