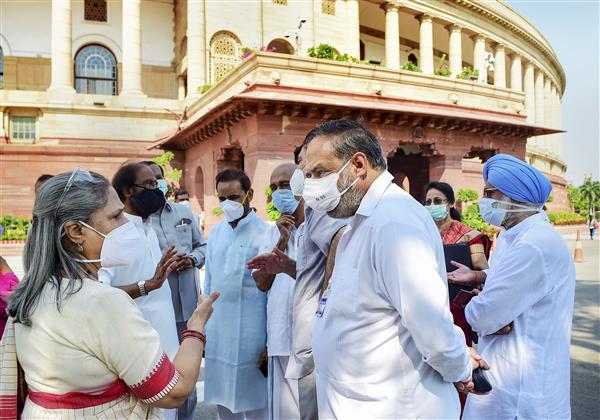 Opposition parties led by the Congress on Tuesday boycotted Lok Sabha proceedings after the government defended the farm Bills in the house and said there was no farmer in the ongoing agitation against the agriculture market-related reforms.

“The Congress hypocrisy stands exposed. This party says one thing in Parliament and does another thing outside. There are no farmers in the ongoing agitation. There are only Congress-sponsored people. The Congress can’t stomach the fact that the new bills are going to improve agriculture growth rate, financial status of farmers and connect the farmers to technologies. The farmers should not fall in for the myths being spread by Congress and its propaganda,” Agriculture Minister Narendra Singh Tomar said when the house reassembled at 4 pm after an hour-long adjournment. Tomar also assured the farmers that the MSP regime will be protected.

“In six years, the NDA government has given three times more money in the form of MSP than the Congress led UPA gave from 2009 to 2014. Also, we announced the Rabi MSP yesterday even before sowing has begun. This shows our government’s commitment to MSP. Even the Congress wanted to bring farm-related reforms but could not due to pressures from middlemen. Former PM Manmohan Singh and Sharad Pawar have all spoken for reforms in the past,” Tomar added.

The Congress led by Adhir Ranjan Chowdhury attacked the minister for what it called a “while lie” and announced boycott of house proceedings saying “the government hasn’t left us any choice”.