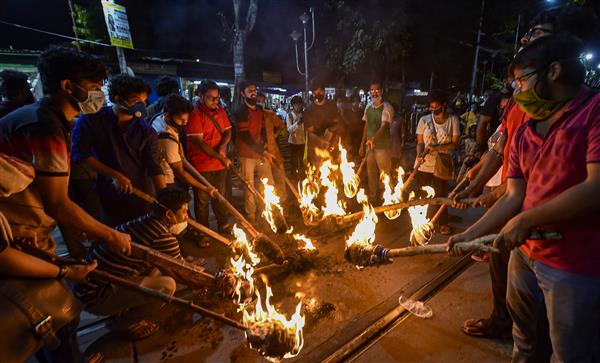 Amid an outrage over the alleged gang rape and killing of a Dalit woman, Hathras Police have lodged an FIR against some unknown people and invoked the sedition charge against them for attempting to “trigger a caste conflict” and “tarnish” the Uttar Pradesh government’s image.

The FIR lodged at Chandpa police station on Sunday mentioned 19 IPC sections, including 124A (sedition), 505 (intending to cause public alarm and inducing someone to commit offence against state or public tranquillity), 153A (promoting enmity between groups).

Altogether, the UP police have filed 19 cases on similar charges in parts of the state.

ADG (Law and Order) Prashant Kumar said six cases have been filed in Hathras district and the rest 13 in Bijnor, Saharanpur, Bulandshahr, Allahabad, Ayodhya and Lucknow.

The development comes amid an undying controversy over the alleged gang rape of the woman and continuous protests and visits to her village by political leaders and activists.

Kumar said efforts are on to vitiate the atmosphere through posters and social media posts. In view of the COVID-19 pandemic, permission had been given for only five people linked to political parties to visit the victim’s village but some parties and workers violated it, he said. The FIR filed at Chandpa police station has also invoked section 67 (transmitting obscene material in electronic form) of the IT Act, according to the FIR.

“The UP government’s statements and facts related to the Hathras incident are being forged, manipulated and circulated through social media. Misleading content is being shared with forged logos of media houses,” a police officer told.

“Some accused are circulating material that could trigger caste-based conflict and these are serious offences considering the current situation in the region,” the officer said, adding the investigation is underway.

According to the FIR, lodged on a complaint by a local policeman, some anti-social elements wanted to leverage the situation to as part of a well-thought “criminal conspiracy” to provoke a “specific community” and a “specific caste” in order to disrupt law and order and “dent the image of a legally established government in the state.

“The accused also tried to lure the victim’s family with an offer of Rs 50 lakh and tried to manipulate them into speaking against the government by changing their previous testimony,” the FIR stated.

It also alleged that an unidentified journalist had tried to pressure a family member into convincing the victim’s father and mother “to give a byte (statement to TV media) saying they are not satisfied with the probe done by the administration and the state government while the victim’s father had earlier publicly said that he was satisfied with the probe.”

The FIR also states that wrong statements attributed to the chief minister with forged logo of a TV channel were circulated to trigger “class conflict” and animosity against a caste-specific in order to leverage the situation.

“Several such imaginary and false statements were circulated on social media by unidentified persons with an objective to damage the image of the government and spread animosity among groups which has led to sensationalism and tension in the state,” it alleged.

The Dalit woman died of grievous injuries in a Delhi hospital on September 29, a fortnight after she was allegedly raped at her village by four “upper caste” men.

She was cremated in the early hours of September 30. While the family claimed the cremation was carried out against their wishes, the police said the last rights in the dead of the night were held “as per the wishes of the family”.

The incidents have triggered massive outrage across the country, bringing severe flak for the government of UP which has now recommended a CBI probe into the whole episode.