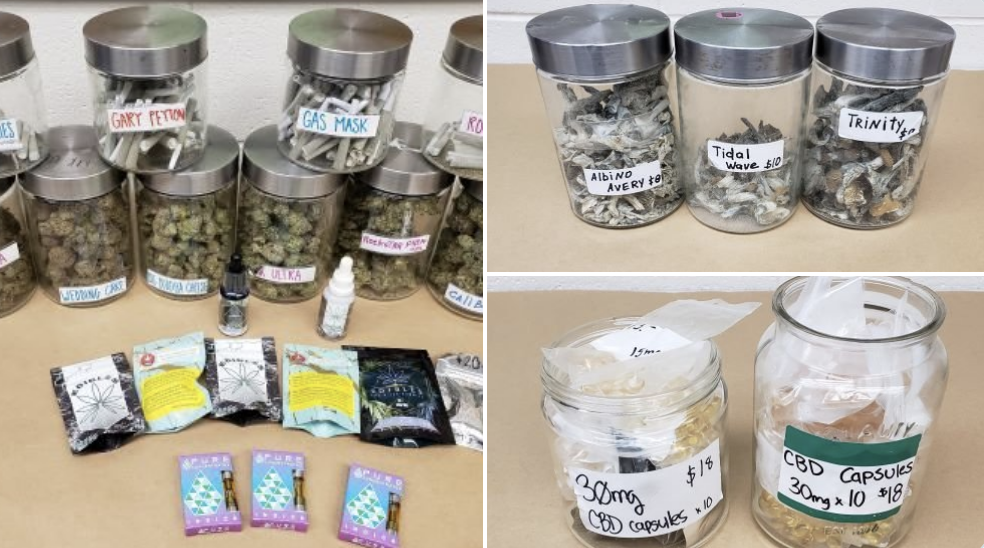 An illegal dispensary selling cannabis and other drugs has been shut down after an investigation by Burnaby RCMP.

Officers were contacted by a concerned community member in mid-February, after a teenager allegedly bought cannabis from inside a business near Hastings Street and Beta Avenue. The store had exterior signage indicating it was a tattoo studio, but was operating without a business license, and was set up as a drug dispensary inside.

On Feb. 18, members of Burnaby RCMP’s Community Response Team (CRT), with assistance from Burnaby bylaw officers, executed a search warrant at the location.

The dispensary has now been shut down.

“It is of particular concern to our officers and to the community that an underage teenager was allegedly able to purchase drugs from this location,” said Cpl. Mike Kalanj with Burnaby RCMP. “The purchase and use of illegal and unregulated drugs creates serious health and safety risks. This is particularly worrisome when youth are involved.”

While cannabis is legal to purchase and consume in Canada, there are strict regulations in place, including where products can be purchased. You must also be 19-years or older to buy, use, or possess non-medical cannabis in B.C.

Burnaby RCMP officers have shut down an illegal dispensary after the store allegedly sold drugs to an underage teen.
Cannabis, magic mushrooms, and suspected MDMA were seized.
Details: https://t.co/SSddv1zjxh pic.twitter.com/jdbYFcuyn8