The West Kelowna RCMP is investigating a motor vehicle collision that occurred this morning, May 7, 2022 at Main Street and Hoskins Road in West Kelowna.

Just before 1:00 a.m. this morning, a police officer in West Kelowna was driving a marked police vehicle on Main Street when it was struck by a Dodge Durango that ran a stop sign. After striking the police vehicle, the Durango crashed into a restaurant located in the 2400-block area of Main Street.

West Kelowna Fire Department, Emergency Health Services and a Traffic Analyst from BC Highway Patrol attended and assisted with the investigation.

The police officer sustained minor, non-life threatening injuries and was transported to hospital for treatment, states Cpl. Tammy Lobb, Media Relations Officer for the Kelowna RCMP. At the time of the collision, the officer was driving a Chevrolet Tahoe. The Tahoe sustained significant front end damage when was t-boned by the Dodge Durango. The officer has since been released from hospital and we are grateful they were not seriously injured as this collision could have been much more serious. 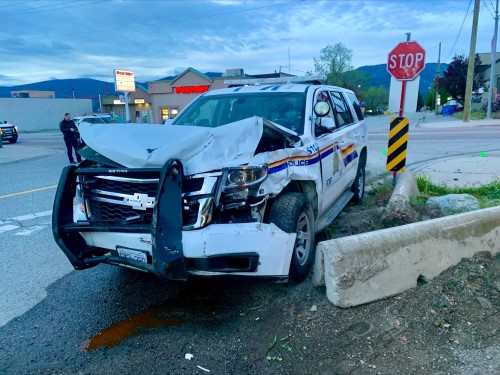 There was significant damage to the restaurant as the vehicle crashed through the front of the business before coming to a stop inside.

The 30-year-old male driver was arrested for impaired operation and was released once sober to appear in court at a later date. The driver could be facing charges related to his arrest. A 20-year-old male passenger travelling in the vehicle was transported to hospital with minor injuries.

Impaired driving puts people and property at risk and is one hundred percent preventable. The Kelowna RCMP reminds our community to always plan ahead and arrange a safe ride. Lobb added.

The investigation is on-going.