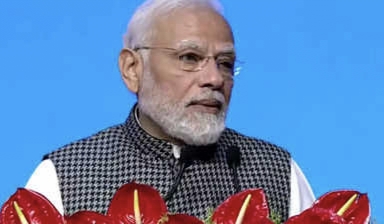 This conference is taking place on the land of Madhya Pradesh which is called the heart region of the country.

By the way, the city we are all in is also amazing in itself. People say Indore is a city but I say Indore is a period. This is a period that goes ahead of time, yet still holds the legacy. Indore is also called the capital of cleanliness. I am sure we will not forget the experiences here.

This Pravasi Bharatiya Divas is special in many ways. Just a few months ago, we celebrated 75 years of India’s independence. An exhibition of the freedom struggle has been set up here. The country has entered the amrit period. India’s global vision will be strengthened, he added.

In so many different countries of the world, when the people of India look like a common factor, then there is a real vision of the spirit of Vasudhaiva Kutumbakam.

When people from different provinces and regions of India meet in any one country of the world, there is a pleasant feeling of Ek Bharat, Shreshtha Bharat. When the most peaceful and disciplined citizens in different countries of the world are discussed, then India’s pride increases further. There is the pride of being the Mother of Democracy.

This year India is also chairing the G20 group of the world. India sees this responsibility as a big opportunity. For us, this is an opportunity to tell the world about India. When the world assesses the contribution of these overseas Indians, it also hears the voice of ‘strong and capable India’.