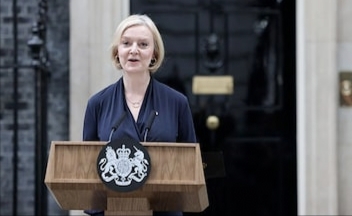 Liz Truss has become Britain’s shortest-serving PM. Her economic programme had caused turmoil in the UK market and many in the Conservative Party were demanding her resignation.

“I can’t fulfill the mandate for which I was elected,” Liz Truss said in a televised speech. That’s why I am resigning. Earlier, she had also apologised for her government’s U-turn on economic policies. And had taken the resignation of the first finance minister of her government.

After this, Indian-american Suella Braverman also resigned from the post of Britain’s Home Secretary. Braverman, a daughter of a Goan-born father and Tamil-origin mother, was appointed home minister 43 days ago when British Prime Minister Liz Truss took office at 10 Downing Street.

Earlier on Wednesday, Braverman had a meeting with PM Truss and it is not considered the result of disagreements over the government’s policy.

British Prime Minister Truss was criticized for reversing her two major decisions. She not only backtracked from the plan to cut taxes on the highest earners and company profits, but she also had to remove her close aide Kwasi Kwarteng as finance minister.

It was reported in many media houses that Liz Truss would not be able to survive long in the UK Prime Minister’s Office. After reversing her entire economic policy, removing her friend and Finance Minister Kwasi Kwarteng from office, her figures dropped to record levels in public opinion itself. MPs in the Conservative Party were also planning to remove her from the post.