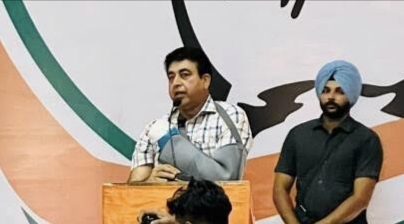 Chandigarh: Captain Sandeep Sandhu, who was the OSD of former CM Amarinder Singh, has been named in the Rs 65 lakh solar light scam in Ludhiana, Punjab. Vigilance was continuously conducting raids to arrest Captain Sandeep Sandhu. Meanwhile, the High Court has now accepted Sandhu’s bail plea. For about 3 months, he was also absconding, avoiding vigilance. Vigilance had also raided the houses and premises of many of his relatives. Teams reached Mohali, Chandigarh, Jagraon, Mullanpur Dakha, Muktsar, Jira etc. but Sandeep Sandhu was absconding.

During this time, about 8 to 10 relatives were detained by vigilance for questioning about Sandeep Sandhu. Vigilance is also examining the records of Sandeep Sandhu’s property.

According to the information received, Satwinder Singh BDPO (now suspended) Sidhwan Bet Block had received government grants for installing street lights in 26 villages during his posting. The BDPO, along with Gaurav Sharma, owner of M/s Amar Electrical Enterprises, purchased the lights at Rs 7,288 per light instead of Rs 3,325.

The accused misused government funds to the tune of Rs 65 lakh and caused financial loss to the state exchequer. A case has been registered against Satwinder Singh and Gaurav Sharma of M/s Amar Electrical Enterprises at Vigilance Ludhiana police station.

The proposal to install street lights was passed by the members of block committee Sidhwan Bet on 30 December 2021.

According to the information, the accused BDPO had approved the quotation on December 27, 2021, before the resolution was passed. To grab this amount, the BDPO also prepared a completion certificate, but street lights were not installed in 26 villages.