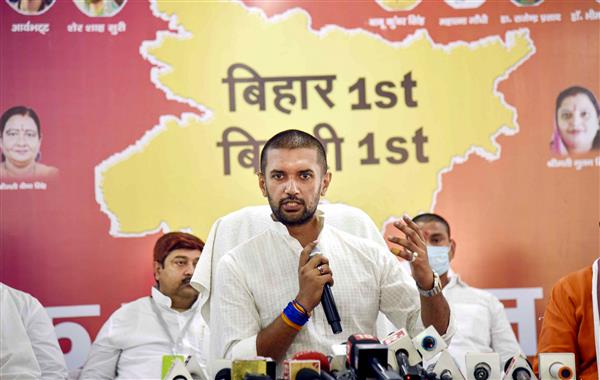 NDA ally HAM created a flutter on Monday with its leader Jitan Ram Manjhi demanding a judicial inquiry into the death of union minister Ram Vilas Paswan while pointing an accusing finger at Chirag Paswan, prompting the LJP chief to claim it was a “plot” by Chief Minister Nitish Kumar to discredit him when election was under way.

Chirag Paswan, in an angry retort to Manjhi, said the former chief minister should ask Prime Minister Narendra Modi about the issue. Paswan jr. said Modi used to call him up every day to inquire after his late father when he was sick and hospitalised, sometimes to even inform him about the LJP founder’s condition after talking to doctors attending to him.

“I request the prime minister to order a judicial probe into the death of Ram Vilas Paswan to unravel the dubious role of Chirag Paswan in the matter,” Manjhi said.

HAM spokesman Danish Rizwan also wrote a letter to Modi backing the demand while citing a video of Chirag rehearsing before issuing a video message a day after the death of his father where he was purportedly seen joking with the people present and even talking about the texture of his hair.

Chirag Paswan accused Nitish Kumar of “scripting a plot to settle political scores with him” and instigating the HAM to rake up an emotional issue to blunt the LJP’s campaign to prevent him from becoming the chief minister once again.

Manjhi wanted to know who ordered the hospital to not issue regular health bulletins of Paswan, who was “such a big leader”. Manjhi also claimed people were prevented from meeting the Dalit leader when he was hospitalised.

Chirag Paswan had informed people about the death of his father through a tweet on October 8.

Manjhi claimed it was being speculated that the LJP leader had died 2-3 days ago.

“When he had telephoned me when my father was in hospital, I told him everything. He neither called me again nor visited Papa in the hospital,” Chirag Paswan told a press conference.

Ever since his return to the NDA, facilitated by Kumar, Manjhi and his party have been routinely targeting the LJP, which has walked out of the ruling alliance in Bihar and is going solo at the hustings. Chirag has also frequently launched vicious attacks on the chief minister.

Both the HAM and the LJP draw strength from Dalit voters, and Manjhi was not on good terms with Ram Vilas Paswan when the two were partners in the NDA in the 2015 assembly election.

“Kumar, who is now showing concern about my father’s death, never telephoned me to know about his health leave alone visiting him in the hospital,” the LJP president said.

“On the other hand, Prime Minister Narendra Modi was kind enough and used to telephone me almost twice a day to inquire about Papa’s health and sometimes even tell me what the doctors are saying about his medical condition.”

He recalled Modi had told his first rally of the election in Sasaram that Paswan stood with him till his last breath.

“Indeed he (Modi) was the only person who was sincerely bothered about him till he breathed his last,” the 38-year-old LJP chief, who recently declared himself Modi’s Hanuman, said.

Flanked by BJP and JD(U) rebels like Rajendra Singh and Bhagwan Singh Kushwaha, he claimed while there were smiles on the faces of LJP candidates after the first phase of polls, Kumar was glum.

“Nitish Kumar will be sent packing after November 10,” he asserted.

Electorate in 94 assembly seats will vote on Tuesday.

Reaffirming that a BJP-LJP government will be formed after the election, Paswan said LJP workers were silently helping BJP candidates in many constituencies and activists of the saffron party were reciprocating the gesture.

The LJP has fielded a total of 52 candidates for the second phase of poll on November 3, including 43 seats where JD(U) nominees are in the fray.

Paswan appeared to suggest a rift between the JD(U) and the BJP when he said while Nitish Kumar’s party had decided to take forward its ‘Saat Nischay” (seven resolves programme) for public welfare, if voted to power again, the saffron party has promised it will create 19 lakh jobs.

“So, whose agenda will be adopted by the future government of the JD(U)-BJP combine?” he wondered.

The LJP leader dubbed the 10 lakh government jobs promise by Grand Alliance’s chief ministerial candidate Tejashwi Yadav as “lollipop”, and wanted to know why didn’t he accomplish the task when he was the deputy chief minister in 2015-17.