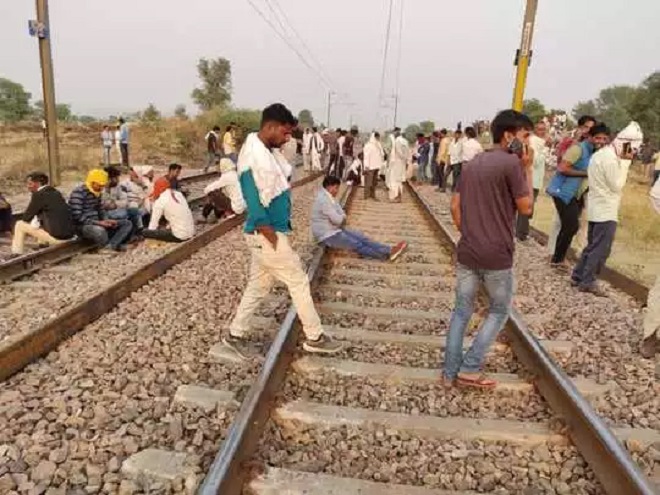 The Rajasthan government on Monday said they were open to further negotiations with Gurjars, who are demanding reservation even as agitating members of the community continued to block a rail track in Bharatpur’s Bayana.

The protest called by the Gurjar Aarakshan Sangharsh Samiti entered its second day.

Movement of roadways buses was stopped on Dausa, Bharatpur, Karauli, Dholpur and Hindaun routes, and road traffic movement entering from Uttar Pradesh was also affected due to the agitation.

A North-Western Railways spokesman said the Railways had cancelled three trains and diverted 29 trains in the wake of the Gurjar agitation.

According to police, youths in large numbers blocked a rail track in Bayana and also damaged tracks.

Hundreds of protesters from the Gurjar community have blocked railway tracks in Rajasthan to demand reservation in jobs and educational institutions. Due to the protest, trains on the Delhi-Mumbai route have been stopped.

The issue was also raised in the Rajasthan Assembly session.

As soon as the session began, Deputy Leader of Opposition Rajendra Rathore sought a reply from the state government on the issue, saying the cabinet sub-committee held talks with Gurjars but members of the community were still blocking railway tracks.

Rathore said Internet services were suspended in various districts and rail-road traffic had also been stopped.

“The state government should inform the House on the issue,” he said.

Speaker CP Joshi then asked the state government to give a reply on it after passing three bills to negate the effect of farms bills passed by the Centre recently.

Health Minister Raghu Sharma said the door was always open for holding talks and any problem can be solved through a dialogue.

“We have made an agreement and if there are any deficiencies… they can be solved through a meeting. The door is always open for holding talks. The state government provided five per cent reservation which was pending from years,” Sharma told reporters outside the assembly.

He said taking the law into one’s hands and damaging property is not a solution to any problem, and added that the people should understand it causes losses to the country.

The major Gurjar organisation started the agitation over reservation on Sunday, a day after community leaders held talks with the Rajasthan government and reached a consensus on 14 points.

The convenor of the organisation, Colonel Kirori Singh Bainsla, on Sunday asked state Sports and Youth Minister Ashok Chandna to come to Bayana from Jaipur.

Later, Chandna reached Hindaun to meet Bainsla and the members of the Samiti but meeting did not take place due to Bainsla’s health and blockade on Hindaun-Peelupura route.

“The agitation will affect traffic on the Delhi-Mumbai rail route. The movement of traffic was disrupted on the Bayana-Hindaun road,” police had said.

Earlier on Saturday, Gurjar leader Himmat Singh said the talks with the government were positive.

The organisation is demanding that the Rajasthan government should get the Gurjars included in the Ninth Schedule of the Constitution, fill the backlog of vacancies and give the benefit of five per cent reservation to the Most Backward Classes (MBCs) in the pending recruitment process.

The 14 points on which a consensus emerged during the talks on Saturday include providing regular pay scale to 1,252 MBC employees who have completed their probation period.

The state government will once again write to the Centre to include the provision related to reservation for the MBCs in the Ninth Schedule of the Constitution.