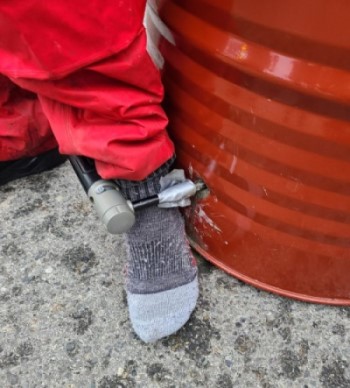 One person has been arrested after a Wednesday morning demonstration that blocked traffic on Highway 1 near Willingdon in Burnaby, creating delays and safety concerns for the public.

On April 13, 2022, Burnaby RCMP officers were called to the area around 7:45 a.m., with drivers reporting all westbound lanes on the highway had been blocked by demonstrators.

When police arrived, the majority of demonstrators left the area. One man who had locked his ankle to a barrel filled with concrete remained on the highway and refused to leave despite being given the opportunity to do so.

Police were able to carefully move him to a safe area, where the Burnaby Fire Department used specialized equipment to safely remove the lock from the man’s leg.

He was arrested for mischief.

The demonstration resulted in all westbound lanes on the highway near Willingdon being closed for about 15 minutes, which caused significant delays and traffic safety concerns. The highway was fully re-opened around 8:40 a.m.