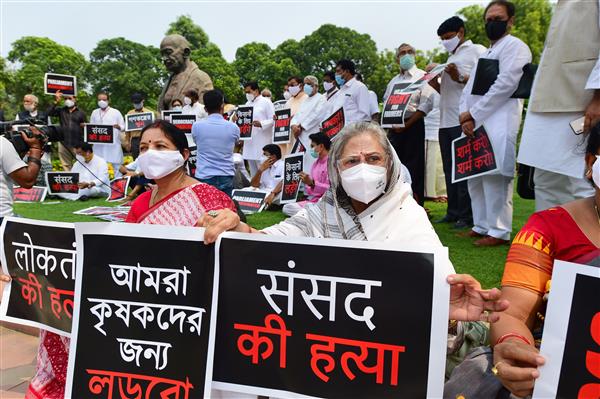 Opposition parties hit out at govt over suspension of 8 MPs, hold protest on Parliament premises

Opposition parties hit out at the government on Monday over the suspension of eight Rajya Sabha MPs and are holding a protest on the Parliament premises against the move.

Eight members from the Congress, CPI(M), Trinamool Congress and the AAP were suspended for the remaining part of the monsoon session over their “unruly behaviour” during the passage of farm bills in the Upper House of Parliament.

“Suspension of the 8 MPs who fought to protect farmers’ interests is unfortunate and reflective of this autocratic govt’s mindset that doesn’t respect democratic norms & principles. We won’t bow down & we’ll fight this fascist Govt in Parliament & on the streets,” West Bengal Chief Minister Mamata Banerjee said in a tweet.

Opposition parties like the Congress, CPI(M), Shiv Sena, JDS, TMC, CPI and the Samajwadi Party are holding a protest on the Parliament premises with placards that read ‘Murder of Democracy’, ‘Death of Parliament’ and ‘Shame, shame’.

“Suspension won’t silence us. We will stand with farmers in their fight. Deputy chairman throttled parliamentary procedures yesterday. Suspension of MPs exposed the coward face of the BJP. People will see through the attempt to divert attention from their undemocratic actions,” said CPI(M) MP Elamaram Kareem, who is among those suspended.

“Wake up crores of farmers of the country, BJP government has mortgaged your life to Adani-Ambani, wake up and oppose this black law. We are on agitation in Parliament, you should agitate outside. The BJP government has passed a black law against farmers. We were terminated for opposing the bill,” said AAP MP Sanjay Singh.

“That is why we are sitting on dharna and will keep sitting till the BJP government explains why this black law was passed by strangling democracy,” he added.

The MPs came to the protest site carrying blankets, and pedestal fans were being fitted to help them fight the scorching heat.

A number of non-NDA parties have also written to President Ram Nath Kovid over the manner in which the government “pushed through its agenda” and urged him not to grant his assent to the proposed legislations.

According to sources, leaders of various political parties including the Congress, the Left parties, NCP, DMK, SP, Trinamool Congress and the RJD have in a memorandum to the President sought his intervention in the matter and asked him not to sign the bills.

The bills will become a law only after the President grants his assent to them.

The two key farm bills, dubbed by the government as the biggest reform in agriculture, were passed by Rajya Sabha on Sunday with voice vote amid unprecedented unruly scenes by protesting opposition MPs.

The Shiromani Akali Dal leadership will meet President Ram Nath Kovind separately on Monday to urge him not to sign on the bills.

Sources said the memorandum of opposition leaders has been sent to the President. Congress MP and noted lawyer Abhishek Singhvi is learnt to have framed the memorandum.

The opposition leaders wish to present their case in urging the President not to grant his assent to the bill after both the Houses of Parliament passed the two bills.