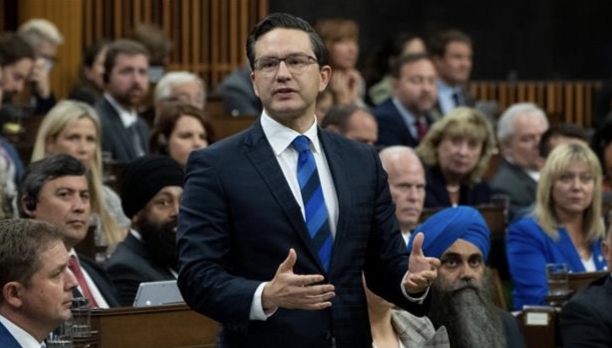 Ottawa: Starting his innings as leader of the opposition in the House of Commons, Conservative leader Pierre Poilievre attacked the Liberal government during the Question Hour.

The Prime Minister Justin Trudeau government, which is struggling to cope with the cost of living and inflation, was put in the dock by Poilievre and asked the Liberals to cancel these tax hikes on workers and seniors.

He said that Canadians are finding tough to cope with rising cost in Canada pension plans and employment insurance premiums.

PM Trudeau and Poilievre are likely to face off for the first time on Thursday. Poilievre said Canadians are facing a huge economic impact due to skyrocketing prices of groceries, gas and housing during the Trudeau government.

He said that in this time of rising inflation, the Liberal government is doing nothing to ameliorate the situation for Canadians.

In response, the Liberals said the government introduced two bills on Tuesday, one to double the GST exemption for low-middle-income families and the other on dental and housing benefits.

Prime Minister Justin Trudeau is currently is in New York to attend the UN General Assembly, he was represented by The Associate Minister of Finance and Tourism Randy Paul Andrew Boissonnault in the session.

He said that the government is working to help Canadians who are most in need.