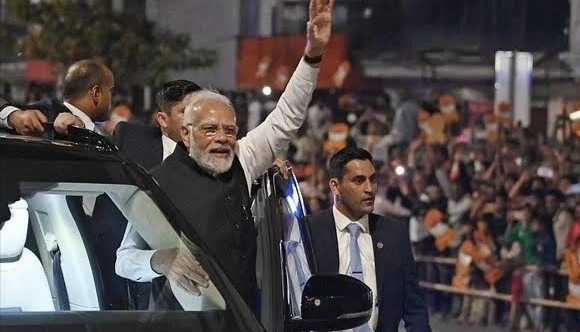 New Delhi: Prime Minister Narendra Modi held a mega roadshow in Delhi on Monday. The roadshow was held from Patel Chowk to the NDMC Convention Centre.

During this time, a crowd of common people and BJP workers gathered to welcome PM Modi on both sides of the roads.

In this meeting, the agenda of Lok Sabha and Assembly is to be discussed. BJP national president JP Nadda, home minister Amit Shah, union ministers, chief ministers of BJP-ruled states and other senior party leaders have attended the meeting.

This is the first major meeting of the party after the massive victory in the Gujarat Assembly elections. The meeting will also focus on the current issues in the country and organisational issues within the party.

The meeting is likely to support the extension of the term of party national president J P Nadda, a media report said.

Nadda’s three-year term as national president ends this month. He is likely to lead the party till the 2024 Lok Sabha elections are over.

BJP leader Sambit Patra said that a meeting of the party’s national office bearers, state unit presidents and various organization secretaries was held before the national executive chaired by JP Nadda. All the proposals to be presented here were discussed. The meeting was held in a cordial atmosphere.