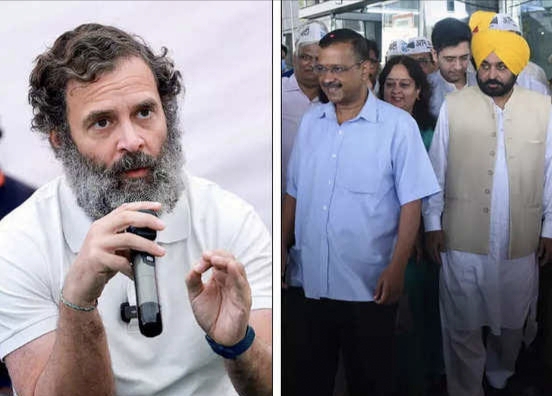 Chandigarh: Congress leader Rahul Gandhi, who arrived in Hoshiarpur on the 5th day of the Bharat Jodo Yatra in Punjab, lashed out at the ruling Aam Aadmi Party (AAP) government for the first time.

He said that Chief Minister Bhagwant Mann must not become the remote control of Arvind Kejriwal sitting in Delhi. He asked the Mann to act decisive and don’t be a rubber stamp CM.

Following this, Mann quipped that Pot is calling kettle black by issuing such baseless statements.

He said that Rahul Gandhi has no moral right to say anything about democracy or democratic norms. Bhagwant Mann reminded the scion of Gandhi family that he has been elected Chief Minister by the people of Punjab who had given whopping mandate in favour of their party. He said that unlike Charanjit Singh Channi who was made Chief Minister by Rahul Gandhi, he has been chosen by people to serve them.

He told Gandhi that little knowledge is always dangerous and that is what he is proving by issuing baseless statements in the state. He reminded the Congress leader that his party had caused irreparable damage to democratic norms by running the Chief Ministers like puppets. Bhagwant Mann said that as a fact of matter Rahul Gandhi should peep into his conscience before making any statement on the issue.