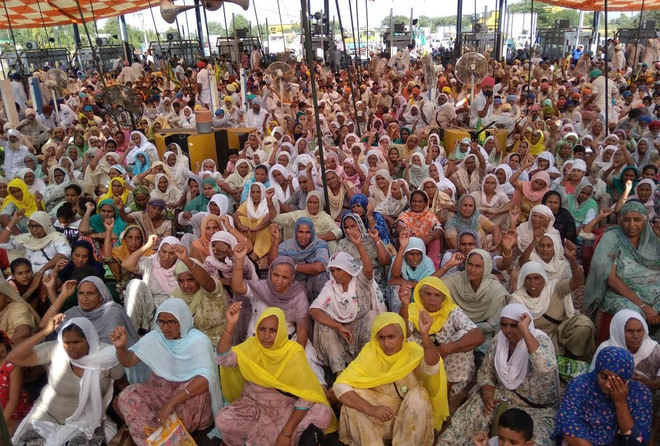 Upping the ante in their protest against the contentious agriculture Acts, farmers are now not letting the toll plazas on the national and state highways here to collect the charges from commuters, thereby, almost turning these into freeways.

In Patiala, farmers are protesting at toll plazas at Dharreri, Chahal on Amloh road, Rakhra on Nabha road and Asarpur Chupki on Samana road. The plazas haven’t been operative for the past six days.

They have also laid siege to three petrol stations owned by corporate houses and plan to protest outside departmental stores and malls in the district.

“The farm Acts have been enacted to profit the corporate houses. We, therefore have decided to stop the toll plazas from collecting the charges to send a message to business houses that we won’t let them spoil our future,” said Bhinder Singh, a protester from Badholi Gujran village.

Swaran Singh, general secretary, Bhartiya Kisan Union (Sidhupur), said they would continue to lay siege to toll plazas until the Union Government withdrew the draconian Acts. He said, “Before the Independence, Britishers had developed railway lines, roads and other infrastructure for their commercial interests in India. But the collective will of the people forced them to leave the country. Similarly, big corporates will meet the same fate, if our concerns aren’t addressed.”

Ranjit Singh, a farmer leader, said they had been getting support from commuters, who gave them salutes and thumbs up to continue their battle.

In Bathinda too, losses are mounting for toll plazas, mega wholesale stores, petrol pump companies and the Railways.

Farmers are not allowing officials of the toll plazas on the Bathinda-Chandigarh National Highway to collect the fee from commuters.

At some petrol pumps, even dealers have announced support to the farmers’ protest. A petrol pump dealer said: “I also come from a farming background and oppose these Acts. However, agitating at petrol pumps and not allowing them to function is also not the right way to protest as the losses are mounting.”

Similarly, a big international brand wholesale store at Bucho Khurd on the Bathinda-Chandigarh National Highway is also facing huge losses as it has been closed for the past seven days with farmers protesting at its main gate and not allowing it to operate.

Meanwhile, BKU (Ekta Ugrahan) leaders said the anger of farmers against the Centre was increasing by the day. They claimed that the Centre wanted to hand over their land and crop in the hands of big corporate houses.