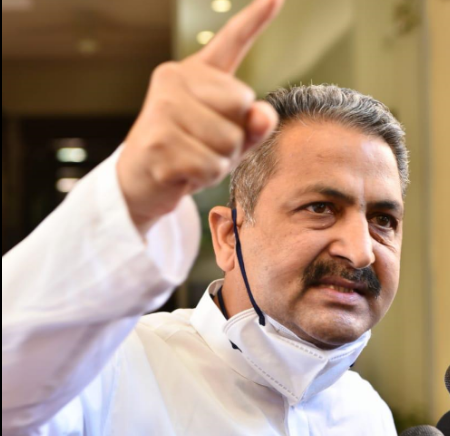 Punjab BJP leaders hiding their faces from Punjabis while their counterparts from Haryana senselessly commenting on bills: Vijay Inder Singla

School Education and Public Works Minister Punjab Mr. Vijay Inder Singla, on Wednesday, lashed out at BJP leaders for criticizing new pro-farmer bills passed by Punjab Vidhan Sabha and questioned the locus standi of Haryana BJP chief to comment upon Punjab affairs. Mr. Singla said, “Have the Punjab BJP leaders sold out their own state’s interests to another state while even their own MLAs in the Vidhan Sabha walked away during special session?”

In a very hard hitting tweet, Mr. Singla also quoted, “Isnt it ludicrous that a day after @PunjabGovtIndia passes a historic bill in VS as BJP staged a walkout, @BJP4Haryana chief wakes up to comment on it! No comment of @BJP4Punjab chief, or BJP MPs inc a Union Minister, which shows how awfully diminished BJP stands now in Punjab!”

“None of the Punjab BJP leaders including state president, central minister and MPs remain mum on the bills. Are not they belong to Punjab or not answerable to the farmers of the state. They fear from the wrath of farmers, arhtiyas and laborers,” Mr. Vijay Inder Singla said.

He added that when it was time for discussion on these bills, both the MLAs of BJP in Punjab Assembly walked out and did not speak any word against these bills in the assembly. He said that the leaders of Punjab BJP have been hiding inside their houses which were clear indications that they backstabbed the farmers, laborers, arhtiyas and other people associated with farming professions of the state.

The cabinet minister said that Chief Minister Captain Amarinder Singh always stood by the interests of Punjab and now once again, he has become ‘Kisani Da Rakha’ by assuring MSP for the crops of farmers. He added that all the demands of the farmers have been incorporated in these bills including imprisonment of minimum three years to the buyer or trader trying to purchase crops under MSP.

The cabinet minister said that it was a historic day as 115 MLAs out of total 117 voted in the favor of these bills and even went to the Governor along with ruling Congress party leaders to urge him to convince the President of India to sign these bills. He added that all the stakeholders of agriculture in the state have hailed the provisions of the newly passed bills and regularly conveying their gratitude to the Congress led Punjab Government for taking firm stand to save the backbone of Punjab’s economy.