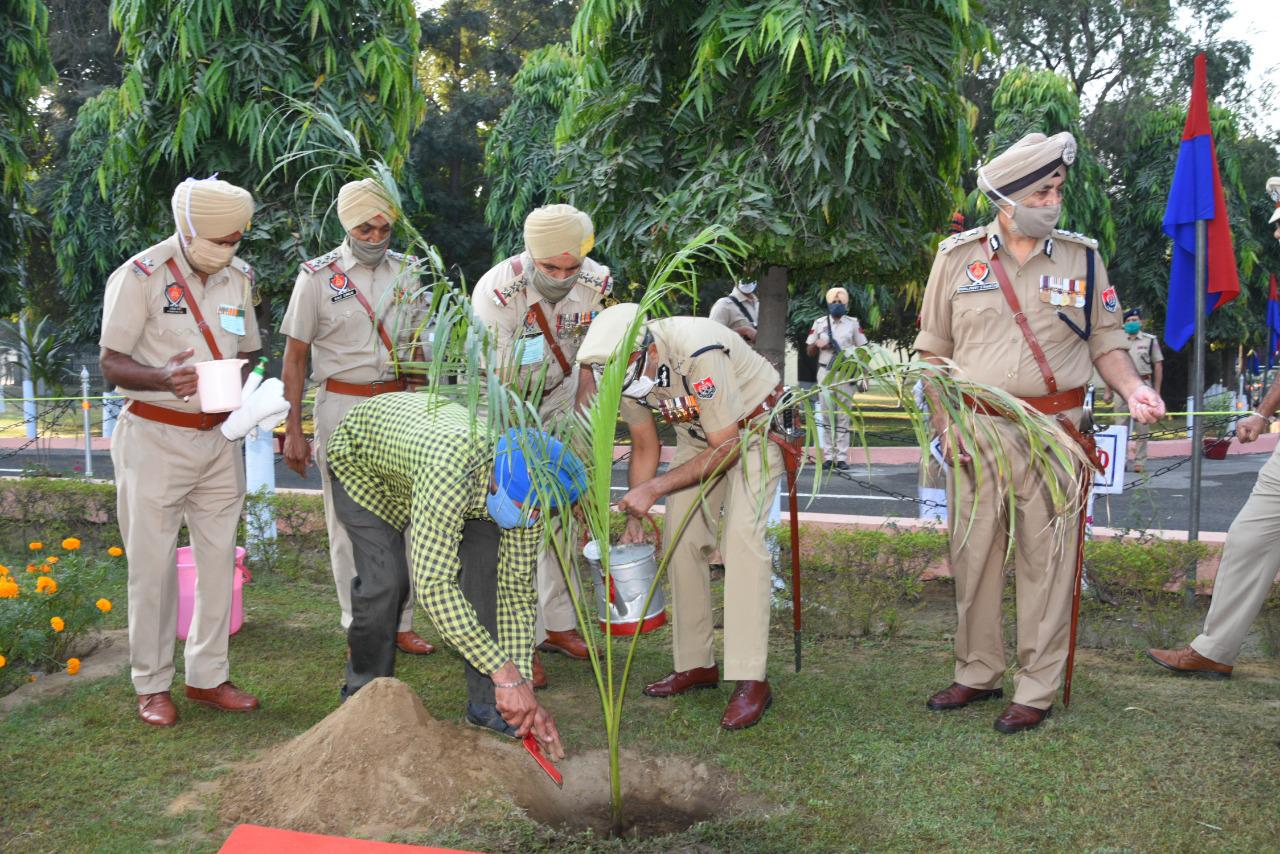 Chandigarh, October 21: To mark the 61st Police Commemoration Day, which is marked by ‘Shok Parades’ and Salute to Police Martyrs in all districts of the country on 21st October, Punjab DGP Dinkar Gupta on Wednesday joined the senior leadership of the Punjab Police to pay glowing tributes to the martyrs of Punjab Police, other State Police forces and central paramilitary forces here at PAP Complex, Jalandhar.

Reiterating that peace and communal harmony has to be maintained in the border State of Punjab, the DGP recalled the stellar role of the Punjab Police in preserving the hard-earned peace of the state, besides protecting and safeguarding the unity and integrity of the country.

He said that it was a matter of great pride for the Punjab Police that over 2000 Police officers/officials of the State Police had sacrificed their lives in line of duty to protect the unity and integrity of the country.

Gupta said that the supreme sacrifice of these martyrs would always continue to inspire the younger generation of Police officers/officials towards their duty of protecting their motherland.

Hailing the efforts of Chief Minister Captain Amarinder Singh led state government and thanking the Chief Minister, who is also the Home Minister of the State, the DGP said that the government had ensured the welfare of the wards of the martyrs while taking up all their concerns on priority.

The DGP also lauded the bravery of Patiala ASI Harjit Singh whose hand had chopped off at Patiala Sabzi Mandi besides the sacrifices of Moga Constable ex-serviceman Jagmohan Singh and Jalandhar Constable Gurmeet Singh, who had laid their lives while discharging their duties with utmost bravery dedication and professional commitment during the last year.

Expressing his satisfaction over the humanitarian steps undertaken by the Punjab Police personnel for the welfare of citizen of the State, especially during curfew/lockdown in the wake of the coronavirus pandamic, the DGP said that the State Police had, while working closely with civil society organizations, served about 12 crore people with dry ration and langar during the curfew period in Punjab in March-April-May this year.

Presiding over a state-level function to mark the 61st Police Commemoration Day at PAP Campus, the DGP said that Punjab Police would forever remember the bravehearts of the force for their valiant deeds and humanitarian acts in the battle against coronavirus pandemic.

He said that as many as 41 Jawans and officers had sacrificed their lives fighting the novel coronavirus.He paid homage to these Corona warriors on the behalf of entire Punjab Police.

During the week long ceremonies organized throughout the State, senior Police officers of all districts, including Police Commissioners and SSPs, visited the families of more than 1500 Police martyrs of the State to enquireabout their well being and also presented token gifts to them as a mark of respect and recognition. Some of the other activities carried out by district police officers during the last ten days include:

• Organized Candle Marches in the memory of brave policemen who laid their lives for the nation.

• Mini marathons / walkathons and Cycle rallies were organized in the memory of the martyrs.

• Tree plantation drives in the memory of martyrs in police lines.

• Short motivational video clips on our martyrs and their heroic tales uploaded on social media handles of the police.

• Photographs of Police martyrs were displayed at prominent locations in the schools where martyrs had studied to motivate the younger generation.

• Stories and articles regarding the heroic tales of our martyrs published in newspapers.

• SSP Patiala, alongwith 25 other police officers of Patiala districts donated Plasma in the memory of the Police martyrs.

Meanwhile, the DGP also inspected the Guard of Honour led by DSP SBS Nagar Deepika Singh and later paid homage to the martyrs by laying a wreath at Martyrs’ memorial at PAP campus. Earlier, Commandant ISTC Sandeep Kumar Sharma read out the names of all 264 martyrs who had sacrificed their lives last year throughout the country during the last year, while discharging their duties in different theaters of conflict across the country.