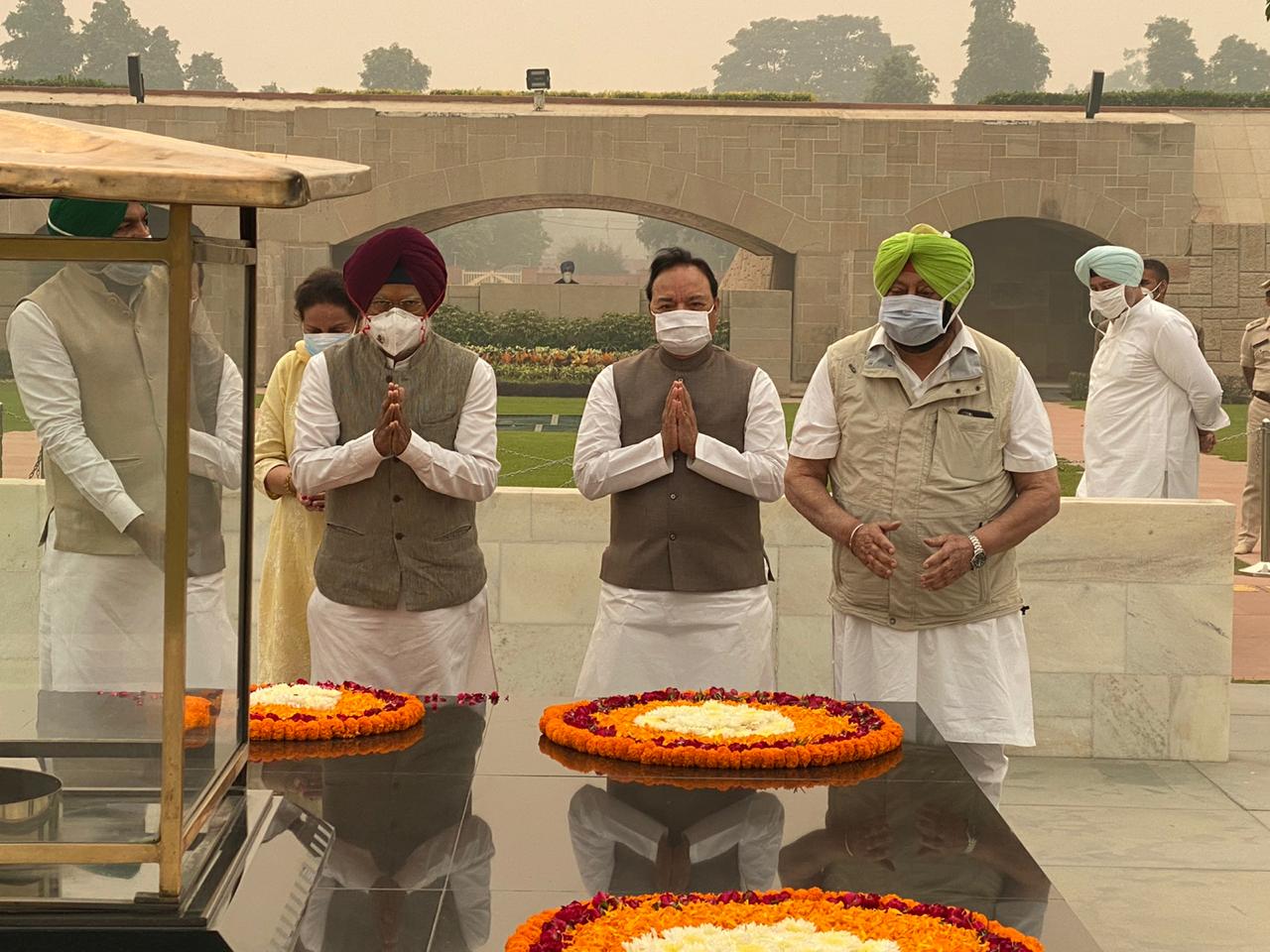 Chief Minister Captain Amarinder Singh on Wednesday launched a mission from Delhi’s Rajghat to save Punjab and its farmers, with a hard-hitting attack on the Centre for its step-motherly treatment towards the state, as well as serious concerns over the role of the Governor, who has still not forwarded the state amendment Bills to the President weeks after they were presented to him following their unanimous passage in the Vidhan Sabha.

“The Governor has no role to play in this, he should have sent the Bills to the President by now, he is a mere post-box in such matters, so why has he not forwarded the Bills till now?” the Chief Minister asked, pointing out that the Governor was still sitting over another Bill {Punjab State Legislature (Prevention of Disqualification) Amendment Bill, 2019}of his government submitted a year ago.

During an informal media interaction after paying his respects to the Father of the Nation at Rajghat, the Chief Minister lamented that the President had declined to give him and other Punjab legislators time to draw his attention to their grave concerns. “He is the head of the nation and we wanted to tell him about the situation in Punjab and hoped that he would talk to the central government,” said Captain Amarinder.

Accompanied by Congress MPs from Punjab, who alone were given permission by Delhi Police to visit Rajghat along with him, the Chief Minister said, in response to a question, that the Centre’s step-motherly attitude to Punjab was wrong. The state had not been paid GST dues since March and its constitutional guarantee of Rs 10 crore was also pending, he pointed out, adding that Disaster Relief Fund had also been stopped by the Centre. “We don’t have money, our coal stocks are over,” he said, asking “how can we survive in this situation?”

The Chief Minister recalled that during Dr Manmohan Singh’s tenure, he had once asked him why he was giving so much to the Akalis in Punjab and the then Prime Minister had responded that as the leader of the central government, he had to treat everyone equally. Captain Amarinder said he hoped the present government at the Centre will also adopt a similar approach towards the state government.

While he had not yet sought time from the Prime Minister to raise the state’s concerns on the Farm Bills and the continued suspension of goods trains by the Railways despite relaxation to movement of supplies by the agitating farmers, the Chief Minister told mediapersons that party MPs had sought meetings with various central meetings. He himself had spoken to Railway Minister Piyush Goyal, who had asked for a guarantee of safety for goods trains, said Captain Amarinder, adding that eventually that was not even necessary as the farmers themselves had allowed movement of supplies, except for two private plants where they were still blocking the lines to the coal shutters. “Why can’t goods trains be allowed on other tracks,” he asked.

Replying to a question, the Chief Minister said the Akalis had indulged in a farcical drama over the Central legislations for farmers to protect their political interests. They will be back with the Bharatiya Janata Party (BJP) before the next Assembly electins in Punjab, he predicted.

The Chief Minister, who said he had chosen to start his mission from Rajghat since Gandhi had identified India with its millions of farmers, made it clear that today’s programme was not a `morcha bandi’ by Punjab’s legislators and MPs but an effort to bring the crisis faced by the state to the notice of the people of India.

Captain Amarinder later proceeded to Jantar Mantar to kickstart a relay dharna of Punjab Congress MPs and MLAs, joined by Lok Insaf Party legislator Simranjit Singh Bains, as well as Punjabi Ekta Party MLAs Sukhpal Khaira and Shiromani Akali Dal (Democratic) MLA Parminder Singh Dhindsa. The Aam Admi Party (AAP), he said, had been pressurised not to join the relay dharna, as their government in Delhi had not passed amendment bills to protect the farmers.