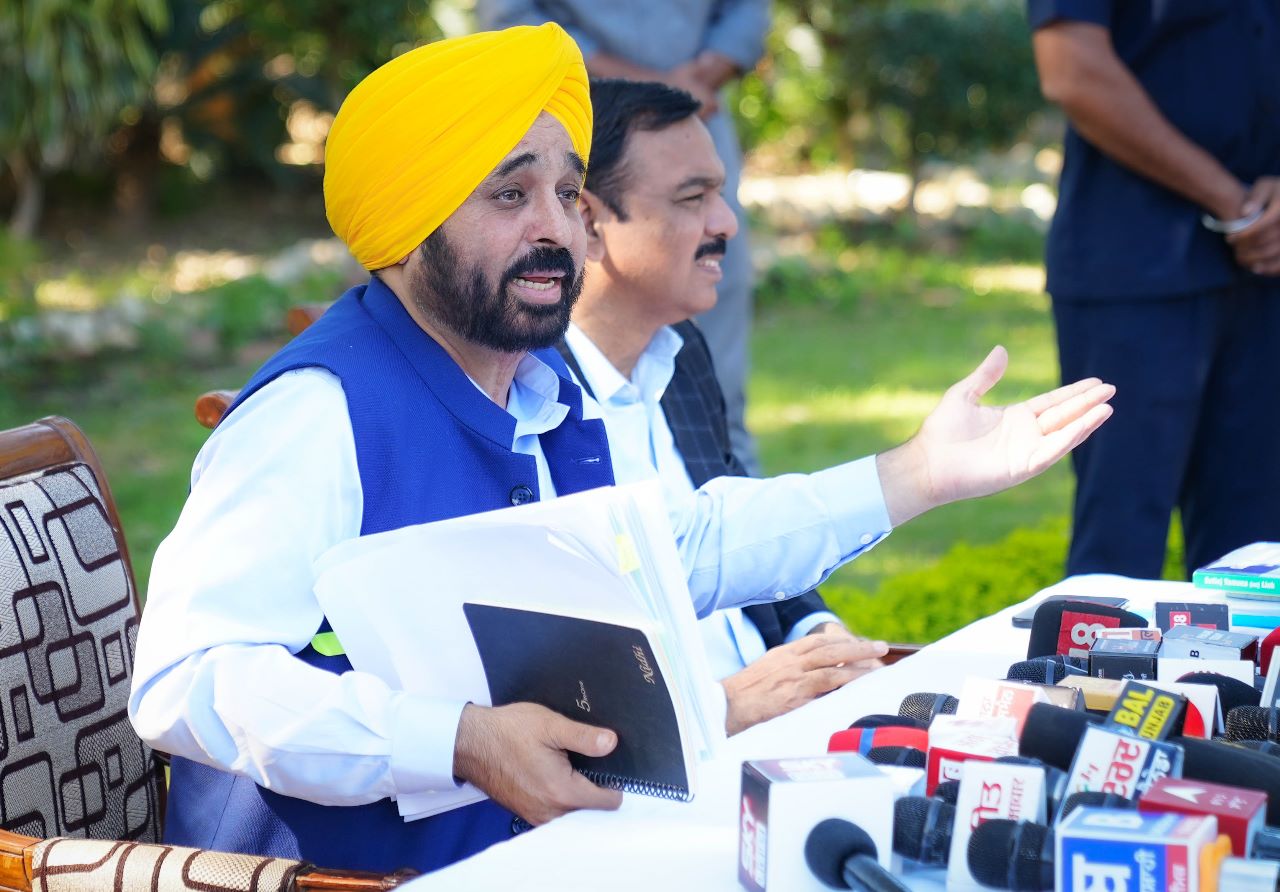 Chandigarh: Outrightly rejecting Haryana government’s proposal to start construction of Satluj Yamuna Link (SYL) canal, the Punjab Chief Minister Bhagwant Mann today categorically said that there is no question of initiating this work, as the state does not have even a single drop of water to share with Haryana.

“At the time when agreement for the canal was inked, Punjab was getting 18.56 MAF of water which has been now reduced to 12.63 MAF, presently, so we don’t have any surplus water to share with any state” said the Chief Minister, while interacting with the media here at Punjab Bhawan after meeting with his Haryana counterpart on the issue of SYL canal.

CM said that Haryana is currently getting 14.10 MAF of water from Satluj, Yamuna and other rivulets whereas Punjab is getting only 12.63 MAF. He said that despite being smaller in area, Haryana is getting more water than Punjab and ironically it is demanding more water at the cost of Punjab. In wake of this fact, Bhagwant Mann said that how can we give water to Haryana if our own fields are starving for it.

He said that 1400 kilometres of rivers, canals and rivulets have dried up in the state due to which pressure had increased on ground water. He said that currently 27% of Punjab’s agriculture is dependent on surface water whereas the remaining 73% is being done through oozing out the groundwater. Bhagwant Mann said that this has resulted in depletion of ground water level in the state and most of the blocks have gone into dark zones.

Mann that instead of seeking water from Punjab, Haryana should give water to the state from the Yamuna river. He said that during the united Punjab days, after independence, the state used to get a share of water from Yamuna. However, Bhagwant Mann rued that after reorganisation of states Punjab was unlawfully deprived of this right.

CM Mann bemoaned that in all the water agreements across the globe a clause is mentioned that the agreement will be reviewed after 25 years in wake of climate changes. However, he said that SYL agreement is the only exception in which no such clause has been mentioned. Bhagwant Mann said that this is the gross injustice which had taken place with Punjab adding that the then government at the centre and leadership of Punjab was responsible for this sin.

The Chief Minister said that it is ridiculous that Haryana is asking us to complete the work on construction of the canal. He said that when we don’t have surplus water, how can we construct the canal? Bhagwant Mann said that the need of the hour is that Punjab should get its full share of water due to which this canal will never turn into a reality.

Similarly, the Chief Minister said that scion of Patiala royal family and former Chief Minister Captain Amarinder Singh, who was Member of Parliament at that time, had welcomed the then Prime Minister for ground breaking of this sinister move. He said that since the survey till now, every step of these leaders speaks volumes of their treachery against Punjab and its people. Bhagwant Mann said that it is ironic that those people who had hailed this decision are now advising him to call an All Party meeting on this issue.

The Chief Minister said that these leaders have sown thorns before the Punjab and its younger generations by indulging in this unpardonable crime. He said that for the sake of their vested interests these selfish political leaders have prepared distress for the state. Bhagwant Mann said that the hands of these leaders are drenched with this crime against state and history will never forgive them for backstabbing Punjab.