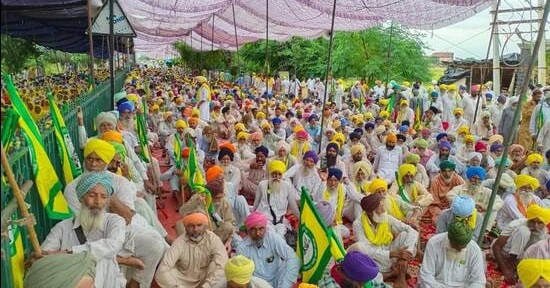 Chandigarh: The indefinite protest by the Bharatiya Kisan Union (Ekta-Ugrahan) against Punjab and central governments continued for the fourth day on Patiala Road in front of chief minister Bhagwant Singh Mann’s residence in Sangrur on Wednesday.

Farmers from all across the state have joined this protest to support the BKU (Ekta Ugrahan).

On Wednesday too, many farmers reached there with ration in their tractor trolleys. The situation of the farmers’ front on the Sangrur-Patiala road resembling the Tikri and Singu border farm protest sites. Farmers are standing in an area of about 3 km.

They have set up temporary makeshift houses, tents, temporary toilets and kitchens as well for the  serving lager to agitators.

Thousands of farm labourers from all over Punjab, including hundreds of women, also joined the protest.

Farmers have been demanding cancellation of FIRs registered against farmers for burning stubble and a bonus of Rs 200 per quintal for the management of stubble without burning it. They also demand compensation for damaged crops and animals died due to lumpy skins besides some others.