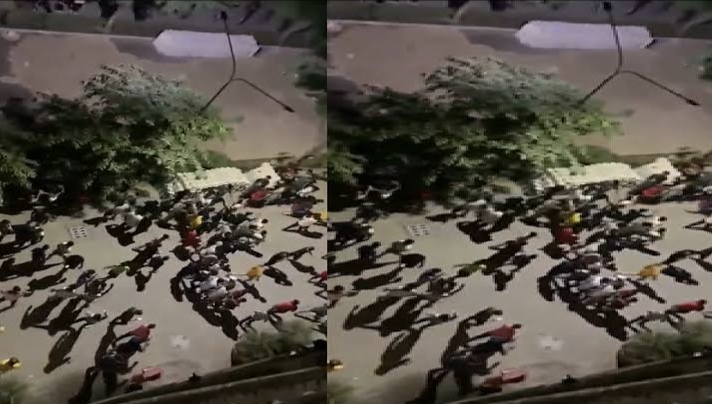 Jalandhar: After the Chandigarh University video scandal, the controversy seems did not stop in the state’s educational institutes as now there was a ruckus in the Lovely Professional University of Jalandhar.

A student committed suicide in the university hostel following this students hold massive protest in the campus on Tuesday night.

A suicide note was also found from the room of Dilip Kumar, a student from Kerala.

After this incident, angry students of the university came out of the hostel and created a ruckus throughout the night. They raised slogans against the university administration. The students allege that the student who died could have survived, but the ambulance reached the university late.

Along with this, the students were also demanding that the suicide note found from the room of the deceased should be made public. Students were raising slogans of We Want Justice. The police were engaged in efforts to calm the atmosphere throughout the night.

The police used sticks late at night to disperse the students who were creating ruckus in the university. The police tried to pacify the protesting students but when the students came out on a ruckus, the police used mild force to remove them. Some students have also suffered injuries in this, police officials said.

Students didn’t allow to take out body for post-mortem

Police and administration officials tried to persuade the students, but their efforts were in vain. The police wanted to put the student’s body in an ambulance and take it to the Civil Hospital Phagwara for post-mortem, but the students blocked the way for the ambulance. The police were not even allowed to take the body out of the university. After a lot of effort, the ambulance was pulled out through another route. The body has been kept at the Civil Hospital in Phagwara.

Deceased student Dilip Kumar was a student of Bachelor of Designing first year. He committed suicide in the hostel room on Tuesday night itself.

Kapurthala police officer said that a student had committed suicide at 5:30 pm at Lovely University. Soon after, the police sealed the room and a suicide note was also recovered in which the student who died has given several reasons.

LPU management has also issued its statement after the student’s suicide at Lovely Professional University. The management of LPU has expressed grief over the death of the student and said that the student died by suicide due to personal reason.