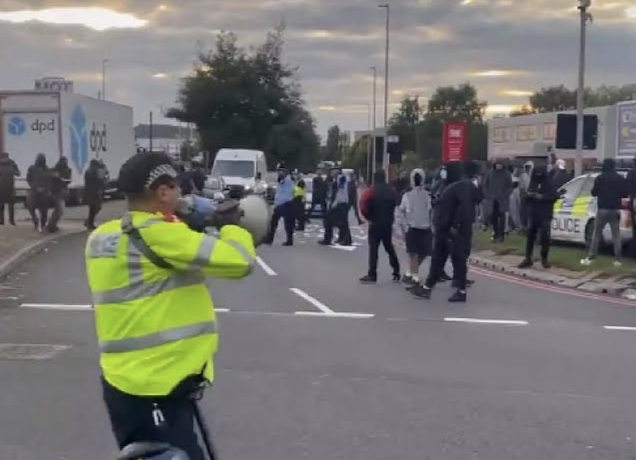 London: In yet another incident, Hindu temple is targeted in England by Muslim community. In the town of Smithwick here, members of the Muslim community demonstrated outside a temple on Wednesday morning. People heard raising slogans of Allah-hu-Akbar outside the temple.

Earlier there were clashes between the people of Hindu-Muslim community in Leicester city and tension still persists here.

The video of the demonstration in the city of Smithwick is going viral on social media. In this, about 200 people are seen moving towards the Durga Bhawan Hindu temple located at Muslim spawn lane.

On getting the information, the police reached the spot. The officers tried to stop the people, but some people started climbing on the walls of the temple.

The clashes between Hindu and Muslim community started after Pakistan’s defeat in the Asia Cup match against India played in Dubai on 28 August. Since then, there has been an appeal for peaceful demonstrations. Posters have been released for this on social media.

Violence started in Leicester on Sept 6

Violence broke out on Melton Road in the Belgrave area of Leicester City on 6 September. Angry Pakistan origin Muslims had attacked Hindus and the police had taken 2 people into custody in this incident.

The police were given the right to interrogate anyone

Leicester Police have issued a dispersal order. Under this, anyone can be stopped and interrogated. People below the age of 16 have been asked to stay at home. So far, the police have arrested more than 20 people in this case. According to Chief Constable Rob Nixon, the police operation will continue.

Both communities leveled allegations of attack

Some Hindu groups claim that some groups are coming to Leicester from Birmingham, a city with a large Muslim population.

The Muslim community has also leveled allegations of the attack. According to activist Majid Freeman, Hinduist groups raised slogans outside the mosque and attacked community members on the street. It is alleged that the mob raised religious slogans in Muslim populated areas.