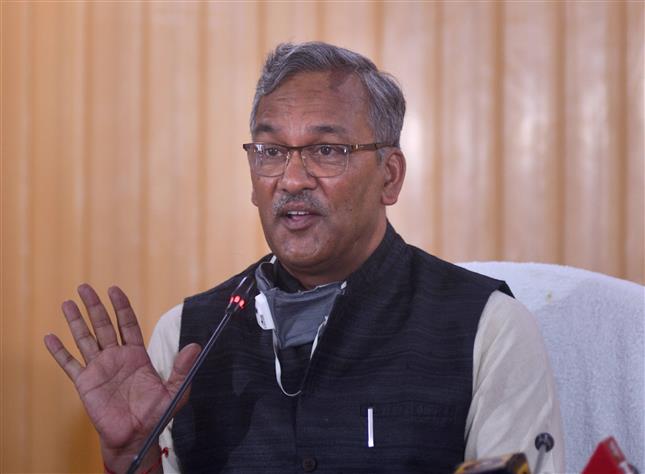 The Supreme Court Thursday stayed the Uttarakhand High Court’s “drastic order” for a CBI probe into corruption allegations against Chief Minister Trivendra Singh Rawat, saying it was passed without hearing him and taking “everybody by surprise”.

The corruption allegations levelled by two journalists pertained to the money transferred allegedly into the accounts of relatives of Rawat in 2016 to support appointment of a person as head of ‘Gau Seva Ayog’ of Jharkhand when Rawat was the in-charge of Jharkhand BJP unit.

A bench headed by Justice Ashok Bhushan said the “drastic order” passed by the high court without hearing the Chief Minister has taken “everybody by surprise” as there was no prayer in the plea by the scribes to lodge an FIR against Rawat.

“The state was not a party and all of a sudden, an FIR was ordered and such a drastic order was passed taking everybody by surprise,” said the bench, also comprising Justices R S Reddy and M R Shah.

Attorney General K K Venugopal, appearing for Rawat, said that an FIR cannot be lodged without hearing the party who is the Chief Minister and this would “unsettle the elected government”.

“An elected government cannot be unsettled like this. The question is can a suo motu order be passed without hearing the party,” Venugopal said.

“A demand for resignation of the chief minister has already been made and the order has been passed without hearing the CM,” he added.

Venugopal told the bench that the high court has “mixed up all grounds”.

“The person against whom FIR is registered is bound to be heard especially in case of a person who holds a public office,” he said.

“The high court passed the order disregarding the fact that this order may destabilise an elected government,” he said.

“The high court is entirety wrong on law when it says that it can direct lodging of an FIR without hearing the party and the high court cannot be oblivious that it will result unsettling of the government,” he said.

Senior advocate Kapil Sibal, appearing for the two scribes, said that he was not opposing the stay order but there was ample evidence in support of corruption allegation against Rawat.

The apex court, while staying the high court order for CBI probe against Rawat, issued notices to the state and the two scribes Umesh Sharma and Shiv Prasad Semwal.

The apex court, however, has not stayed the part of the high court order by which it had quashed the FIR lodged against the two scribes in July this year under various provisions of the IPC relating to sedition, cheating, forgery and criminal conspiracy.

While quashing the FIR, the high court had ordered CBI probe into the allegations levelled against Rawat.

The top court passed the order while hearing an appeal filed by Rawat against the high court’s October 27 verdict.

The FIR against the scribes was lodged for posting a video on Facebook alleging that one Amritesh Chauhan from Jharkhand deposited money after demonetisation into the bank account of a couple, Harendra Singh Rawat and his wife Savita Rawat, who are allegedly related to the chief minister.

Harendra, a retired professor, had lodged the FIR at a police station in Dehradun against Sharma and also alleged that the journalist was blackmailing him.

The apex court, on October 16, had dismissed a separate plea by Sharma seeking transfer of three criminal cases pending against him to Delhi from Dehradun on the grounds of being targeted by the Rawat government.

The top court had observed that “credibility” of Sharma’s “journalistic activity” was itself questioned by his member of the sting operation team.

The top court had noted that Sharma faces 17 cases in Uttarakhand, four in Uttar Pradesh, five in West Bengal, two in Delhi and out of which one is under investigation of CBI, and another one at Ranchi, Jharkhand.

In its judgement, the Uttarakhand High Court had said, “Superintendent of Police, CBI Dehradun is directed to register an FIR on the basis of the allegations levelled in para 8 of the petition in WPCRL no. 1187 of 2020 and investigate the case in accordance with law, with promptitude.”

“This court is of the view that considering the nature of allegations levelled against Trivendra Singh Rawat, the Chief Minister of the State, it would be appropriate to unfold the truth. It would be in the interest of the State that the doubts are cleared,” it had said.

“Therefore, while allowing the petition, this Court proposes for investigation also. In view of the nature of the allegations, this Court is of the view that the CBI should be directed to lodge an FIR on the basis of allegations levelled in para 8 of the instant petition and investigate the case in accordance with law,” the high court said.

It had also observed that criticizing the government can never be sedition and unless the public functionaries are criticized, democracy cannot be strengthened.