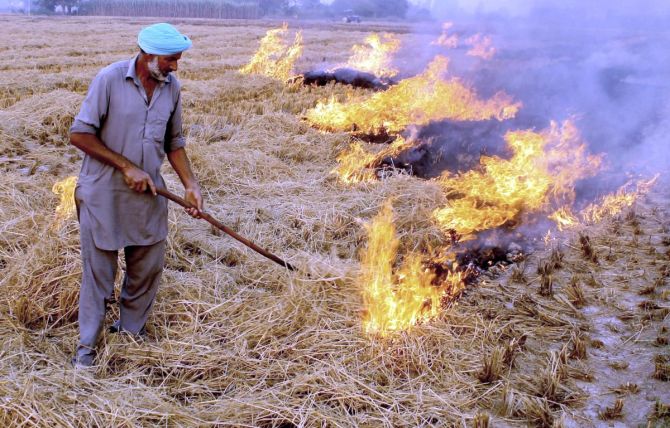 The Centre on Thursday told the Supreme Court that it has brought an ordinance to deal with air pollution problem in Delhi-NCR which turns into a virtual gas chamber during October-November due to stubble-burning by farmers in Punjab, Haryana, UP and Delhi.

During hearing on PILs on air pollution, Solicitor General Tushar Mehta informed a Bench headed by CJI SA Bobde that the President had promulgated the ordinance which sets up Commission on Air Quality Management in Delhi-NCR.

“We would like to look at the ordinance before passing any orders. Even the petitioners would like to see. Let’s hear it next Friday,” the CJI said posting the matter for further hearing on October 30.

Headed by a Secretary-rank officer, the ‘Commission for Air Quality Management in National Capital Region and Adjoining Areas Ordinance 2020’, will have jurisdiction over NCR, including areas in Haryana, Punjab, UP and Rajasthan with regard to air pollution.

The decision came three days after Mehta assured the top court that the government was in the process of introducing a law to deal with the menace of air pollution in Delhi-NCR. The top court had decided to keep in abeyance its order to appoint Justice MB Lokur (retd) as a one-man panel to check stubble-burning.

According to the Ordinance, the Commission supersedes all other bodies/authorities set up through judicial orders or otherwise on air quality management and in case of a conflict between orders of the Commission and those issues by state governments, the Commission’s orders will prevail.

It means the newly set-up Commission – which is to function under the Central Government – will replace the Environment Pollution Control Authority (EPCA) constituted by the Supreme Court more than two decades ago.

Any non-compliance of measures or directions of the Commission will attract a maximum jail term of five years or fine up to Rs one crore or both.

As senior advocate Vikas Singh, representing one of the petitioners, said the situation would get worse by next week, CJI Bobde said, “We will hear you, Mr Singh, and the Solicitor General too and look at the points made by you. This is not an adversarial litigation….

“If any of the parties here fall sick because of air pollution till next date then you are solely responsible… Ensure no one falls sick due to air pollution,” the CJI told Mehta in a lighter vein.

The Bench said some experts had said that it’s not only stubble-burning that creates pollution.

“All of you should stop using the beautiful cars and start using bicycles now,” the CJI commented.

Earlier, the Supreme Court had on October 16 appointed Justice Lokur as a one-man committee to monitor the measures taken by governments of Punjab, Haryana, UP and Delhi to prevent farmers from resorting to stubble-burning.

“It is necessary that there must be some monitoring of stubble-burning with a view to its prevention before it assumes abnormal proportions,” the Bench had said.

But on October 26, the top court decided to put its order on hold after the Solicitor General said the government would come up with a law within three-four days to deal with air pollution problem.

Despite a ban on stubble-burning in Punjab and Haryana, farmers continue to do so because of lack of financial incentives to switch over to environment-friendly farm waste management practices.