Chandigarh: The Congress has suffered a major setback in Punjab ahead of the ‘Bharat Jodo Yatra’ starting from 7 September.

Sodhi, however, assured in her resignation letter that she would remain loyal to the party. Sodhi became the president of Punjab Mahila Congress in November 2021.

She did not appear in recent party events

Congress first staged a dharna in Chandigarh against inflation. After this, they staged a sit-in outside the Vigilance Office against the action of the AAP government on the Congressmen. Then a meeting was called in Delhi to prepare for the rally of inflation. Mahila Congress chief was nowhere to be seen in all this. Now Sodhi was absent during the preparation of the program of Bharat Jodo Yatra. 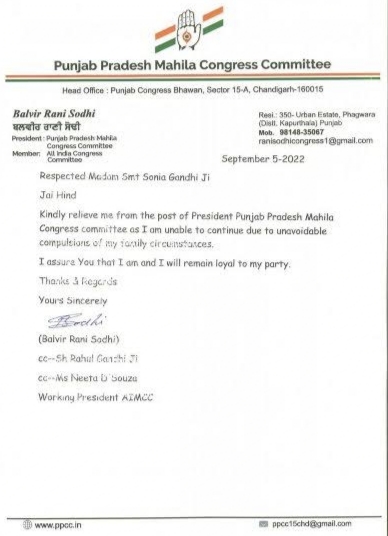 Rebellion visible even during ticket distribution

In the last assembly election at time of ticket distribution, the Mahila Congress had shown revolt. She alleged that there were 12 candidates for ticket from Mahila Congress but no one was given tickets. Later, Sodhi was angry at being ignored and had even spoken of demanding the dissolution of the women’s wing. She said that even Congress MPs didn’t meet her.