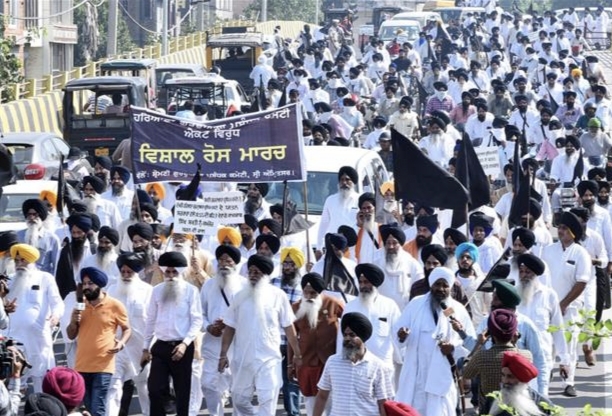 During the demonstration, the protesters carried black flags and placards with slogans written against the formation of the Haryana Committee.

The march was held from Darbar Sahib to Kachheri chowk, which was led by SGPC president Advocate Harjinder Singh Dhami. The march was attended by members of the SGPC and employees of the SGPC.

The protest march, which started with panthic chants, reached the deputy commissioner’s office, where SGPC members staged a protest.

On this occasion, a memorandum in the name of the Prime Minister was handed over to the Deputy Commissioner and sought to repeal separate committee law in Haryana, They also demanded the release of Sikh prisoners.

The sit-in was called off after the deputy commissioner took a memorandum. The decision to take out the march was taken at a special session convened by all the members of the SGPC yesterday.

Apart from this, on October 7, marches will be taken out from Takht Kesgarh Sahib and Takht Damdama Sahib to Akal Takht, SGPC members said.