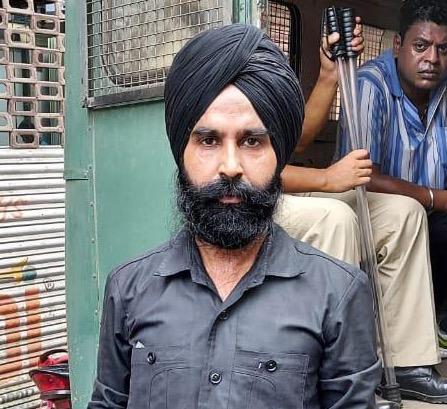 A court here on Monday granted bail to Balwinder Singh, whose arrest at the BJP’s ‘Nabanna Chalo’ rally earlier this month led to an uproar as his turban came off during a scuffle with the police over his firearm, officials said.

Singh, a resident of Bhatinda in Punjab, has been in the custody of the Howrah City Police since his arrest from the rally on October 8.

“He was granted conditional bail by a court in Howrah,” a senior officer of the Howrah City Police.

Singh, a private security officer hired by a BJP leader, was booked under sections of the Indian Penal Code and the Arms Act for carrying a firearm, the license of which is valid only in the Rajouri district of Jammu and Kashmir, police claimed.

Controversy had erupted after clips of the police beating up Singh, 43, during the BJP’s march to the state secretariat—Nabanna, amid widespread vandalism went viral on social media.

A section of people claimed on social that the police had pulled his turban during the scuffle, following which it came off. However, the police have denied the charge.

He was arrested with a loaded pistol.

The turban controversy emerged as a major political flashpoint between the TMC and the BJP, with the opposition party accusing the state government of hurting religious sentiments.

The state government had said that “communal colour” was deliberately being given to the incident to serve “narrow partisan interest”.

Singh’s wife and son had come to Kolkata on Tuesday and met Governor Jagdeep Dhankhar at Raj Bhavan, seeking his intervention on the issue.

Violence had erupted in Kolkata and adjoining Howrah on October 8 as BJP activists tried to go past barricades put up by the police to stop their rally to the secretariat.