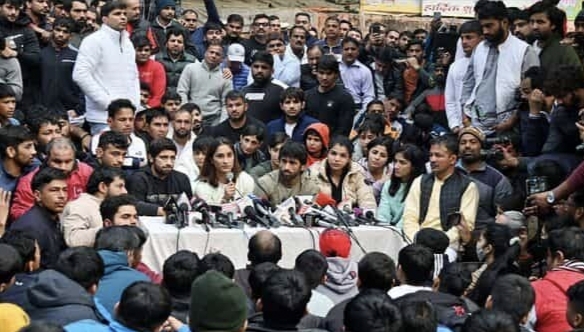 New Delhi: The wrestlers, who have been protesting at Delhi’s Jantar Mantar for two days, called off their sit-in late Friday night after they got assurance from the government that their grievances would be addressed. In a first step to address their grievances, Wrestling Federation of India (WFI) president Brij Bhushan Sharan Singh is being relieved of the responsibilities of the president’s post. The wrestlers had accused the Wrestling Federation of India and its president of sexual harassment and corruption.

Officials said, “It has been decided to form a monitoring committee whose names will be announced on Saturday. The committee will complete the investigation in four weeks. It will seriously investigate all allegations of financial or sexual harassment against WFI and its president.”

“Brij Bhushan Sharan Singh will stay away from the association till the investigation is completed and will cooperate in the investigation, while the day-to-day functioning of the WFI will be looked after by the monitoring committee,” Union Minister Anurag Thakur said.

He said, “During the interaction, the players also gave many important suggestions to improve the games. We thank the players for that.”

The Sports Minister said that all the players spoke with patience. They listened to them for 7 hours. They had asked the wrestling association to respond within 72 hours on the same day.