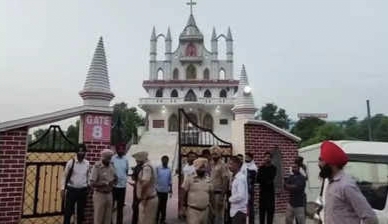 Chandigarh: A statue of Lord Jesus destroyed by miscreants after vandalising a church in Punjab’s Tarn Taran city. Four accused entered the church at 12.30 pm on Tuesday night. Two accused were seen in CCTV, who broke the heads of the idols of Lord Jesus and Mother Mary outside the church.

The priest’s car was also set on fire. There is tension in the area and followers of Christians community have blocked highways in Amritsar seeking justice in the incident.

Three days ago there was a clash between Christians and Nihangs in the village near Jandiala.

According to the police, four miscreants had entered the church and put a pistol on the guard’s head and tied him with a pole.

On the first floor of the church, the statue of Mother Mary and Lord Jesus was demolished. This entire incident was captured on CCTV. The accused separated the head of the idol and picked it up and took it away. While leaving, the accused also set ablaze the car parked inside the church. 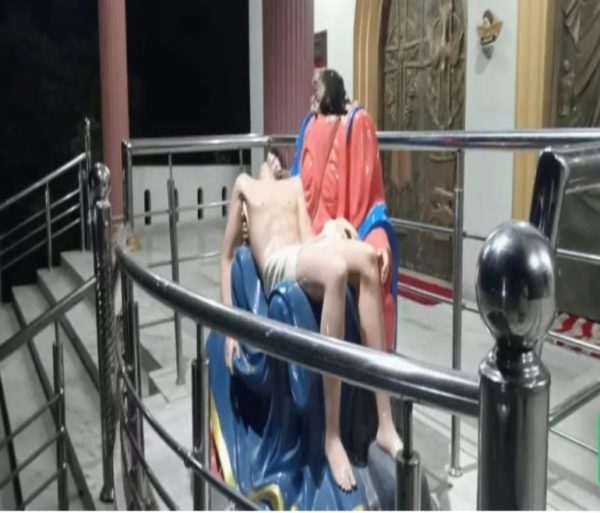 Following this, followers of Christian faith have closed the Patti-Khemkaran state road on Wednesday morning. The Christians sitting on the dharna are demanding justice and arrest of the accused. Police have reached the spot and efforts are being made to convince the people.

On Sunday, the ongoing Christian program in Jandiala Guru’s village Daduana was stopped by the Nihang Sikhs. Nihangs had also created ruckus at the venue. The police have registered a case against 150 Nihang Sikhs after this incident.

On Tuesday, the Jathedar of Sri Akal Takht Sahib, Giani Harpreet Singh issued a statement opposing the Punjab government to register a case against the Nihangs.

He said that the Christian priests are misleading Hindus and Sikhs by hypocrisy and getting them converted. Many times Nihangs complained about this, but the government did not listen to them. After this the controversy flared up.