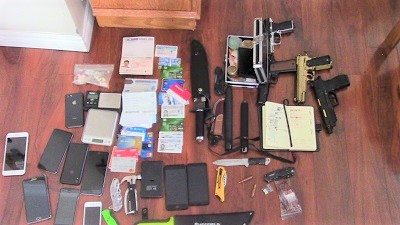 An investigation by Surrey RCMP has resulted in multiple charges against two men allegedly responsible for trafficking Cocaine, Fentanyl and Methamphetamine in the Surrey City Center area.

This investigation, which spanned ten months, began in July 2020. Surrey RCMP Drug Unit launched an investigation after an increase in street level drug trafficking activity around the 10200-block of City Parkway, near the Surrey Centre Skytrain Station. Two men were arrested and are now facing multiple drug related charges.

Through the course of the investigation multiple items were seized including illicit drugs, drug paraphernalia and packaging, edged weapons, identification belonging to unrelated individuals, multiple cellphone and multiple replica firearms.

Both men have been release from custody by the courts on strict conditions, awaiting their trial date to be set.

Drug investigations are complex, and in addition to the evidence gathered through police observations, they require laboratory analysis of any substances that are seized, says Corporal Vanessa Munn, Surrey RCMP Media Relations Officer. We are committed to strategically targeting the drug trade and the violence that accompanies it.

Anyone with more information about drug trafficking in Surrey is asked to contact the Surrey RCMP at 604-599-0502. If you wish to make an anonymous report please contact Crime Stoppers at 1-800-222-TIPS or www.solvecrime.ca.