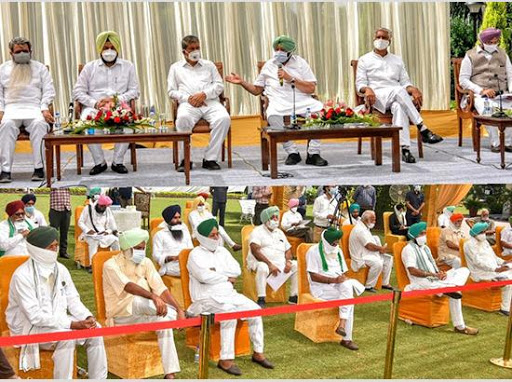 Punjab Chief Minister Captain Amarinder Singh has rejected the one-week ultimatum of the Kisan Unions for holding a special Assembly session to negate the Farm Laws, saying he will do what he feels is necessary in the interest of the farmers.

While he had already said he would be calling a special session of the Vidhan Sabha to bring in necessary amendment Bills, ultimatums is not the way to force the government into taking hasty steps, he said. His sole interest lies in protecting the state’s farmers and the farm sector at all costs, and not in appeasing the farmer organisations, the Chief Minister said, adding that he will take whatever decisions needed in the best interest of the farming community.

He was reacting to reports that, at a meeting held on Wednesday, the Kisan Unions had issued an ultimatum to the state government for convening a special session of the Vidhan Sabha to amend laws for countering the Centre’s agricultural legislations.

The Unions’ threat to gherao his residence or the houses of the state ministers and Congress leaders would not force him into taking any decision which may eventually turn out to be detrimental to the interests of the farmers, said Captain Amarinder, making it clear that he would not compromise the farmers’ interests under pressure or threats from the Unions.

He pointed out that he had taken suggestions of all these Unions a few days back on the way forward on the Farm Bills, and would ensure that nothing is allowed to obstruct his government’s efforts to save the livelihood of the farmers and secure the future of their children.

On the decision of the Kisan Unions not to heed his appeal to allow goods trains to pass amid their `Rail Roko’ protests, the Chief Minister said it was regrettable, since by not relaxing their agitation, these organisations were damaging the interests of the farmers as well as the state.

The state government needs to urgently transport foodgrain, coal, fertilizer and petroleum on priority, besides lifting the paddy grain from the Mandis, for which the RBI had already authorised the first tranche of the around Rs 30,220 crore against credit limit till October end, he pointed, urging the Unions not to endanger the farmers’ interest by their decision. The balance CCL of the total Rs 35,552 crore will be released after revision at the end of the month while sanctioning the amount for November.

The Chief Minister said if the current stocks of wheat and rice were not lifted from the godowns, there would be no storage capacity left for the next harvest. Further, he noted that the state’s coal stocks were critical, and if not replenished soon there would be severe power shortages, which would hamper the wheat sowing operations.

Captain Amarinder also pointed out that with fertilizer stocks running low, potato sowing would also be adversely affected. With blockades at petrol stations, oil flow was also getting affected, which would impact the movement of tractors and the produce, he added.

The Unions, at today’s meeting, had decided to continue with their present agitation, including `Rail Roko’, without any dilution/relaxation, till October 15, when they will hold their next meeting. They also decided to block all major highways in the state on Friday, from 12 noon to 2 p.m.

Captain Amarinder said while his government was totally committed to fighting shoulder to shoulder with the farmers in their fight for their survival, these decisions of the Kisan Unions were not in the interest of the famers. They would cause immense hardship to the farmers themselves, apart from the ordinary citizens of Punjab.

“This is a collective fight, for which all political parties should join hands with the protesting farmers and the state government,” he said, urging the Kisan Unions to reconsider their decisions in the larger interest of the state and its people, including the farmers.