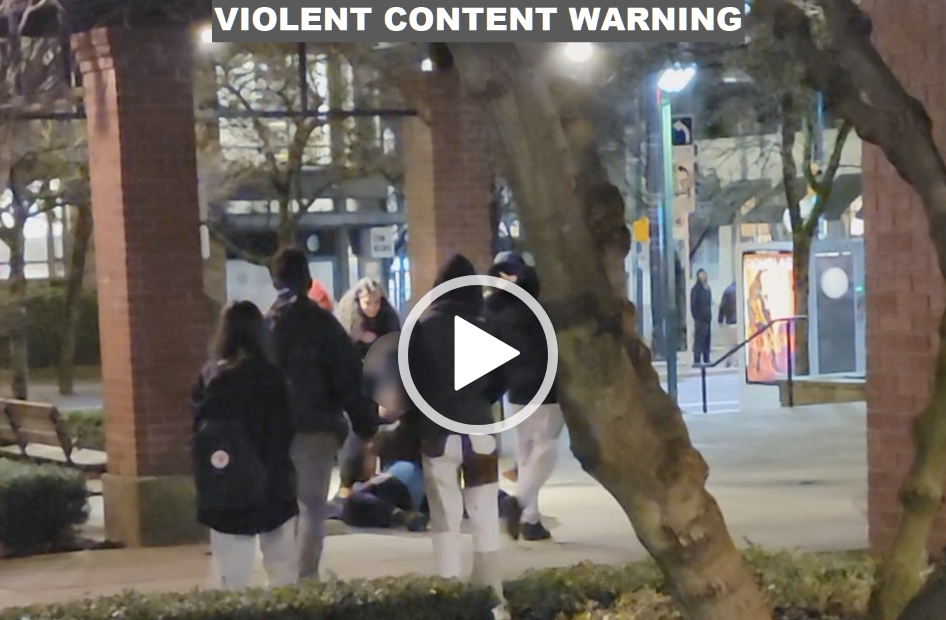 Vancouver Police have released video footage of a violent swarming that occurred last weekend in Yaletown, and are appealing for anyone with information to come forward.

“This graphic bystander video shows a large group watching and filming as two men punched and kicked a defenseless man in Emery Barnes Park,” says Constable Tania Visintin. “While this video is troubling to watch, we have had considerable success in identifying suspects in stranger attacks, and we hope that by releasing this video someone will come forward with information that can help us identify the people responsible.”

The assault occurred at 11:30 p.m. February 20th, in a heavily populated area near Davie and Richards Street, in the heart of downtown Vancouver. It was filmed by a bystander, who flagged down a nearby VPD officer and turned over the video. When officers arrived in the park, however, the suspects and victim had left.

VPD quickly located and arrested one of the suspects – a 19-year-old man from Richmond – on Granville Street. He has been released from custody while VPD collects more evidence and completes its investigation.

VPD later found the victim at his home after someone called 9-1-1 on his behalf. The victim, a 44-year-old Vancouver man, had significant facial injuries that required hospitalization.

Police are now working to identify the second man seen in the video.

“This park is surrounded by high-rise towers and its part of a heavily populated area,” adds Constable Visintin. “There must be people who either saw this swarming, were there when it happened, or recognize the people in the video. We’re asking those people to do the right thing and come forward.”

The unidentified suspect is a man in his twenties, about five feet nine inches tall, and 160 pounds. He was wearing a red hoodie, black pants, black running shoes, and was carrying a black satchel.

If anyone recognizes the suspect, or has any information, they are asked to call police at 604-717-2541.