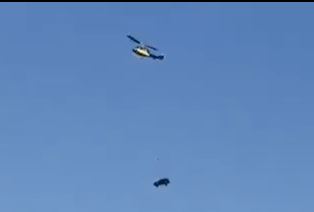 Vancouver Westend residents woke up to loud helicopter noise on Tuesday morning to find a car dangling in the sky tied to a Chopper above in the English Bay area. There was a second helicopter following the first one closely. On a couple of occasions the helicopters appeared to be very close to the buildings.

Shocked residents scrambled to find out what was going on. However soon it became apparent that this was stunt shoot for some kind of commercial. Some residents were also irked by the nuisance in the early morning hours while others questioned the safety measures.

Within minutes lots of videos appeared online of these helicopters pulling the stunt in the sky.

For the last 30 minutes all I hear is a chopper, just looked out my window and saw this! @NEWS1130 @yvrshoots back and fourth over English Bay pic.twitter.com/oD5izHaSn5