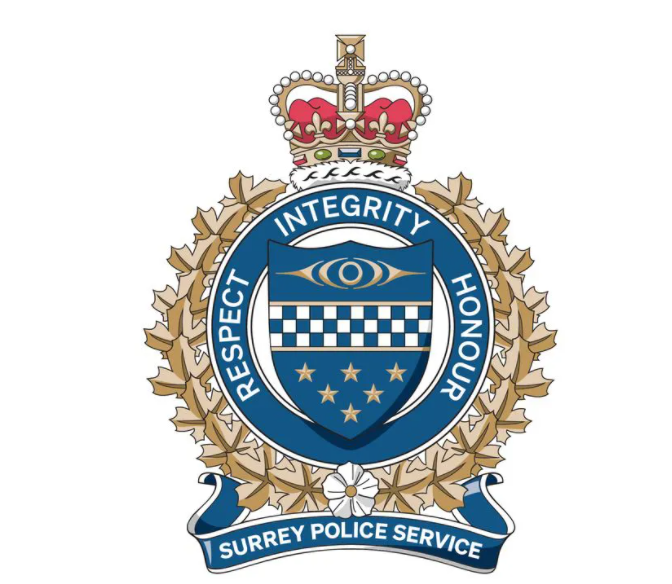 Video: Surrey gets a step closer to getting its own Police Services, launches its Crest

Surrey Police Service unveiled its new badge, vision and values, all reflective of how the Service envisions its community safety partnership with the citizens of Surrey, predicted to be British Columbia’s largest city in less than ten years.

Flanked by the words honour, integrity and respect, the shield within the badge has three key visual elements: The Coast Salish eye, a fess (check) pattern, and six stars—one for each of Surrey’s town centres (Cloverdale, Guildford, Fleetwood, Newton, South Surrey, Whalley/City Centre).

The Coast Salish eye, designed by Semiahmoo First Nation artist Leslie Wells is at the top of the shield, acknowledging the First Peoples who first inhabited this land. Surrey is situated on the traditional ancestral and unceded territories of the Katzie, Kwantlen and Semiahmoo First Nations.

“We are grateful to First Nations communities and Mr. Wells for the honour of allowing us to use his art as part of our badge,” says Chief Constable Norm Lipinski. “We value its significant meaning and we do not take lightly the responsibility we have to all people.”

The fess (check) pattern is a nod to Sir Robert Peel, acknowledged as the founder of modern, democratic policing principles. His nine principles of policing have withstood the test of time and are widely accepted as the foundation of community policing. The themes of crime prevention, community trust, and engagement, will be key tenets of the Surrey Police Service. The fess pattern is taken from the hatband of the Surrey Police in the United Kingdom, as a reminder to all who work for SPS, that in accordance with Peel’s Principles, collaboration and respect between a police service and the community is essential.

“A crest is so much more than fabric fastened to a uniform; it is a source of pride for police officers and the incredible work they do,” adds Chief Lipinski. “We are focused on creating a team of individuals who are service-oriented, represent the diversity of our community, and who will be guardians of public safety in Surrey. We will treat this symbol and all it represents with honour, integrity and respect.”

In keeping with the City’s history of municipal policing, SPS will also honour the municipal police officers who came before them (1887-1951) through its approach to badge numbering.

“The first SPS badge will be emblazed with the number 22,” says Police Board Chair Mayor Doug McCallum. “When it is handed to Chief Lipinski, we will all be reminded of the 21 sworn members of the original Surrey municipal police department who came before him, including Constable Edmund T. Wade and Constable George McDonald, killed in the line of duty in 1927. The badge also honours the original Surrey municipal police officers who transitioned to the RCMP, this month, 70 years ago.”

Chief Constable Lipinski also announced the department’s vision today—a promise to the citizens of Surrey: SPS is a progressive, community-based police service that values diversity, partnerships, and accountability as it works to enhance public safety and community well-being.

“Our values represent our commitments to the community and the actions the SPS will take in the course of its duties,” explains Chief Lipinski.  “We understand we are here to serve all citizens and to do so with both courage and compassion.”