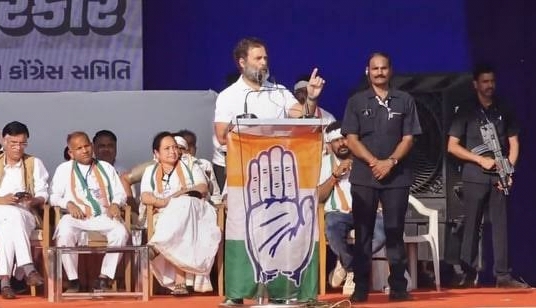 “You can speak in Hindi, we all understand”… Man interrupts Rahul Gandhi during rally in Surat

Surat: Rahul Gandhi faced an embarrassing situation during a rally in Surat, Gujarat on Monday when he was stopped by a worker during his speech. Congress leader Bharatsinh Solanki was translating Rahul Gandhi’s speech in Hindi into Gujarati to reach out to the people when Rahul Gandhi was narrating an anecdote related to his grandmother Indira Gandhi. Then a worker interrupted his speech and said, ‘You cab speak in Hindi. We all understand it. During his rally he said, “When I was a small child, my grandmother gave me a book. There were a lot of pictures in it. I loved her.”

Bharatsinh Solanki told the initial part of this story to the people in Gujarati, but further he felt uncomfortable. Soon after, a man stopped him at the public meeting. The man told Rahul Gandhi, ‘You can speak in Hindi’ We don’t need translation.”

Following this, Gandhi said okay and continued his speech in Hindi.

At the same time, Rahul claimed that the BJP is working to take away their rights. “They call you ‘vanvasi’. They don’t say you are India’s first owner, but that you live in a forest. Do you see the difference? It means they don’t want you to live in cities, they don’t want your children to become engineers, doctors, learn to fly planes, learn to speak English.”

Gujarat today is witnessing high-voltage campaigning ahead of next month’s Assembly polls as all top leaders of the top three parties claiming power are addressing a series of rallies across the state.