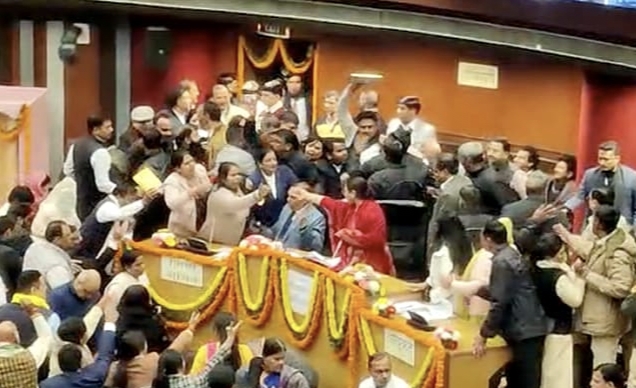 New Delhi: The mayor of the Municipal Corporation of Delhi (MCD) is being elected today. The Deputy Mayor and 6 members of the Standing Committee will also be selected in the Civic Center MCD Election.

Aam Aadmi Party councillor Mukesh Goel objected that the first elected candidate should be sworn in and not nominated. BJP and AAP workers clashed in the house and there was a mayhem during the session.

Delhi Deputy Chief Minister Manish Sisodia has expressed displeasure over the ruckus. “How much more will the BJP fall for hiding their misdeeds in MCD? Postpone elections, illegal appointment of presiding officers, illegal appointment of nominated councillors and now not administer oath to elected councillors of the people… If you cannot respect the decision of the people, then why conduct elections?”

Presiding Officer Satya Sharma first announces the oath of nominated councillors. Sharma started the proceedings of the House by becoming the presiding officer.

In this, 250 elected councillors will vote. Also, 7 Lok Sabha MPs, 3 Rajya Sabha MPs and 14 MLAs of the nominated people who have been formed on the consent of the Delhi Assembly Speaker will also participate in voting. In total, 274 people will be voters in this election.

On the fourth floor of the civic centre, the House complex has a seating capacity of 300 people, including officials, councillors, MPs and MLAs. Councillor supporters of any party will not be allowed inside the premises. Apart from the Aam Aadmi Party, the BJP has also fielded its candidates for this election.

In the 250 wards of MCD, the Aam Aadmi Party won 134 wards by defeating the BJP, which was formed in the Municipal Corporation of Delhi for 15 years. Also, BJP won 104 wards in this election.

The Congress has announced not to participate in this election. Delhi Pradesh Congress Committee president Anil Kumar said that the people of Delhi have supported the BJP and AAP, respecting which the party will distance itself from the election of mayor, deputy mayor and standing committee.