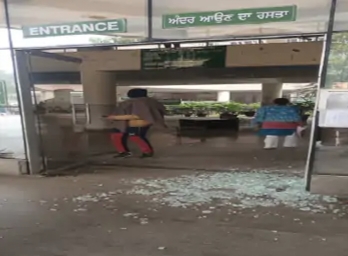 Chandigarh: In a strange incident, when the family went to collect the body to perform the last rites, the staff of the Civil Hospital in Punjab’s Ludhiana district on Thursday said that their son’s body was not here and was already cremated.

Later, it was found that body of the youth was taken by unknown persons from civil hospital’s mortuary.

After knowing this, kin of deceased went furious and a ruckus broke out at civil hospital. They vandalised the premises.

Seeing the commotion in the hospital, the doctors immediately informed the police. ADCP Rupinder Kaur Saran led heavy police force reached the spot. The police have calmed the matter, but there is anger among the family.

According to the police, Ayush Sood, a resident of Salem Tabri in Ludhiana, was admitted to the civil hospital due to ill health. Ayush died on January 1. His sister live abroad. She came from abroad the previous day, so youth was to be cremated on Thursday.

Father Rakesh Sood said that when he came to collect the body of son Ayush, he was told that the body was not there. His body has been already been handed over to some other family and was cremated.

It is being said that the body of the boy named Manish and Ayush were negligently changed.