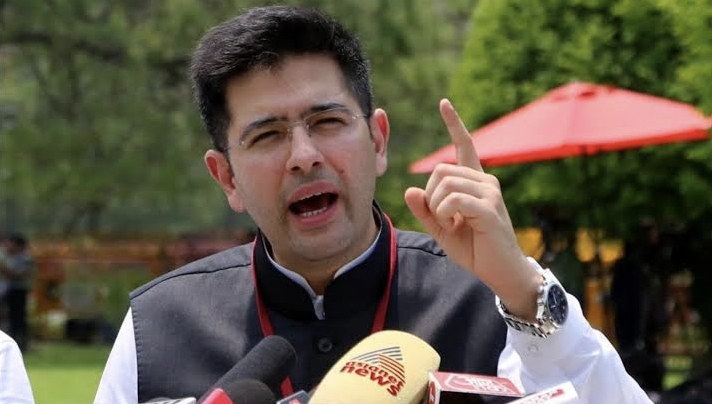 ‘I visit temple every Tuesday, I am ardent follower of Lord Hanuman’, AAP MP Chadha says in Gujarat

During a press conference Chadha said, “As the Arvind Kejriwal was born on Krishna Janmashtami and God sent him with a special task to finish off “descendants” of Kansa. I am an ardent follower of Shree Hanuman ji and I visit the temple every Tuesday to worship lord Hanuman,” said Chadha.

On the contrary, the BJP is demolishing ‘Ganpati Pandals’ to disrespect Hindu gods. The BJP leaders are not working for any religion or caste but only concerned to fill their own coffers and to make their relatives rich, he claimed.

He rejected the allegations levelled by the BJP against Gopal Italia, president AAP Gujarat unit MP Chadha saying that Italia has never used objectionable language against PM Modi or anyone else. He said that Gopal Italia is being attacked by the BJP because he is from Patel Community and he had participated in the protests organised by the Patel community against the BJP .

Training his guns on the BJP leaders, Chadha said that false claims are being made against AAP leaders including Italia to malign the image of the party and its supremo Arvind Kejriwal ahead of Gujarat polls.

“Old videos of our leaders have been made viral to create a political upheaval in the state. BJP is terrified because by now they have realised that people of Gujarat want ‘Parivartan’ (change) from their corrupt rule of 26 years ” he said.

Replying to a query, Chadha said that only AAP’s events are being cancelled, and BJP goons are creating ruckus in the AAP party’s rallies.

Training guns at BJP leaders, Chadha said that calumnious claims are being run against AAP leaders including Italia to malign the image of the party and its supremo Arvind Kejriwal ahead of Gujarat rolls so that people will not vote for AAP, however, people of Gujarat have made up their mind for ‘parivartan’ and AAP will register a landslide victory to form a government this time in the state.