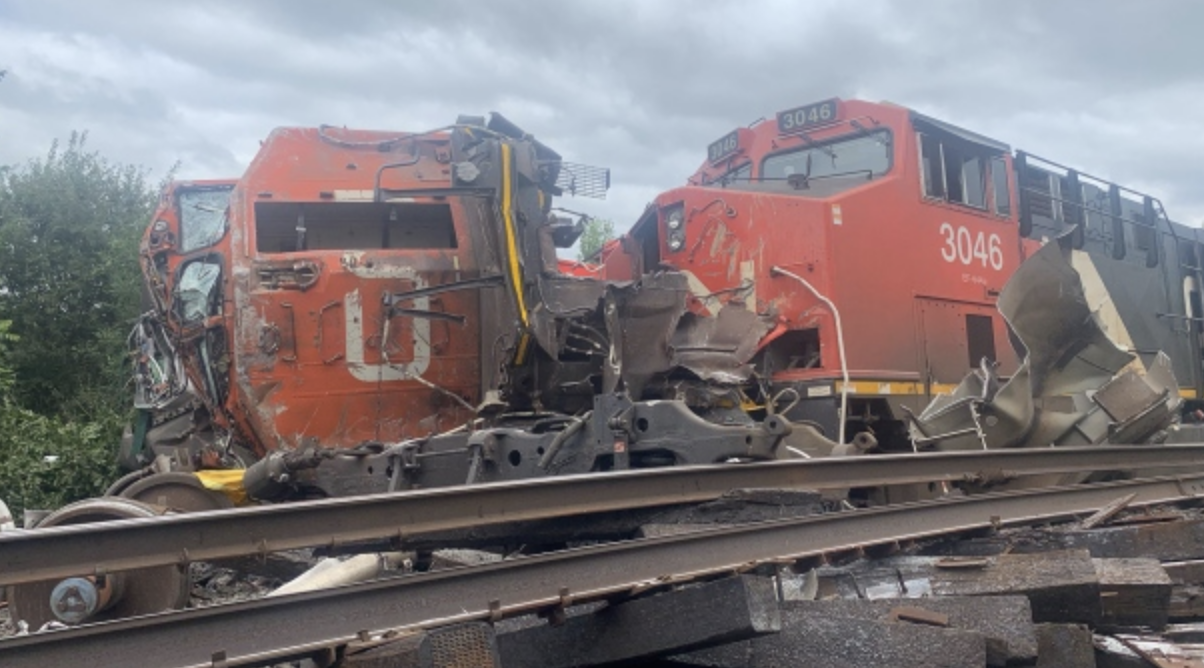 One person injured in freight train collision in eastern Ontario

(Prescott) During the morning hours on Thursday, September 2, 2021, there was a cargo train derailment in the Town of Prescott. Two cargo trains were involved on the CN railway tracks near the Edward Street overpass, where locomotive engines and several box cars had been overturned. None of the overturned box cars were carrying hazardous substances and following a meeting of the Town of Prescott Emergency Management Group, there are currently no concerns for the safety and well-being of residents and no evacuation is required.

Emergency personnel have responded and are on scene to direct traffic. All CN staff have been accounted for and have sought medical attention as required. All dangerous goods have been contained.

Canadian National Railway Company is currently on-site taking control of the incident. The Town of Prescott would like to remind travellers to ensure emergency services can allow for traffic flow and highly discourages travellers from assembling at or near the overpass or railway tracks. We would like to remind residents that this is an on-going investigation.

“I am very thankful that the train derailment in Prescott has not resulted in loss of life, and that we fortunately managed to avoid even more serious consequences earlier today,” said Mayor Brett Todd. “While our thoughts and best wishes are with the injured CN employee, a walk through the scene of the collision made it clear that this could have been much worse. I am also grateful to have avoided significant damage to Prescott infrastructure like our Edward St. rail overpass and utility connections in the area, and that this incident did not involve hazardous materials. I want to thank our dedicated Prescott Volunteer Fire Department for such outstanding work on the scene, along with our always impressive partners with the Grenville OPP, all other first responders, and of course, CN.”

“I do want to ask residents to stay away from the area, as it is under active investigation. Please do not go to the rail lines, and avoid congregating at the top of the Edward St. overpass. We need to let our first responders, the OPP, and CN complete their investigations and clean-up and repair operations. So, you can do your part by giving the area around the rail lines a wide berth for the time being, as operations will be continuing here for some days to come.”

The health, safety, and well-being of residents, emergency personnel and staff, is of utmost importance and the Town of Prescott will continue to show transparency and to communicate throughout the evolution of this situation.  Thank you for your patience and understanding.