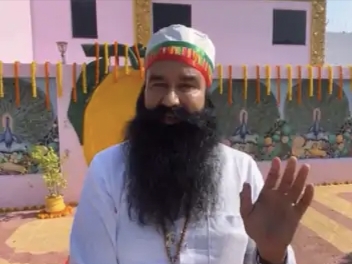 Out of jail before Haryana panchayat polls, Ram Rahim tells followers to ‘do as directed’

Chandigarh: Dera Sacha Sauda chief Ram Rahim has come out of jail on 40-day parole ahead of Adampur bypoll and panchayat elections.

On Saturday morning, he left Sunaria jail and reached Baghpat Ashram in Uttar Pradesh. On reaching there, Ram Rahim released a video message in the 2 minutes 15 seconds clip and asked his disciples to follow the instructions of the responsible persons and not to act as per their own will.

He said in his message to devotees, “We have reached the ashram. May the god make everyone happy. I know I don’t have to tell you repeatedly so listen to your responsible people. We are very proud of our children. May the Supreme Father, the Supreme Soul, give you a lot of happiness. We know you will obey our words. ”

Ram Rahim has been granted parole for 40 days yesterday. After which he came out of Sunaria jail in Rohtak, Haryana this morning.

Honeypreet, the main disciple, and Pritam Singh, the dera chief’s bodyguard, had arrived to receive him. Ram Rahim along with Honeypreet reached Baghpat in UP in two vehicles.

Earlier, there were speculations that he might also go to Gurusar Modia in Rajasthan. Ram Rahim wanted to come to Sirsa but the government did not allow it.

Ram Rahim was granted parole by the Haryana government just before the Adampur by-election and panchayat elections. Ram Rahim can get a 90-day leave in a year. So far, he has taken parole for 50 days. Now only 40 days of parole was left, which will now be completed.

Got parole before Punjab assembly elections

Since 2017, he has been serving a sentence in a sexual abuse case. He was also convicted in the murder of journalist Chhatrapati and former dera follower Ranjit Singh.

Ram Rahim got a 21-day parole on February 7, just before the Punjab elections this year. After this, on June 17, Ram Rahim got parole for 30 days and stayed at Baghpat Ashram in UP.