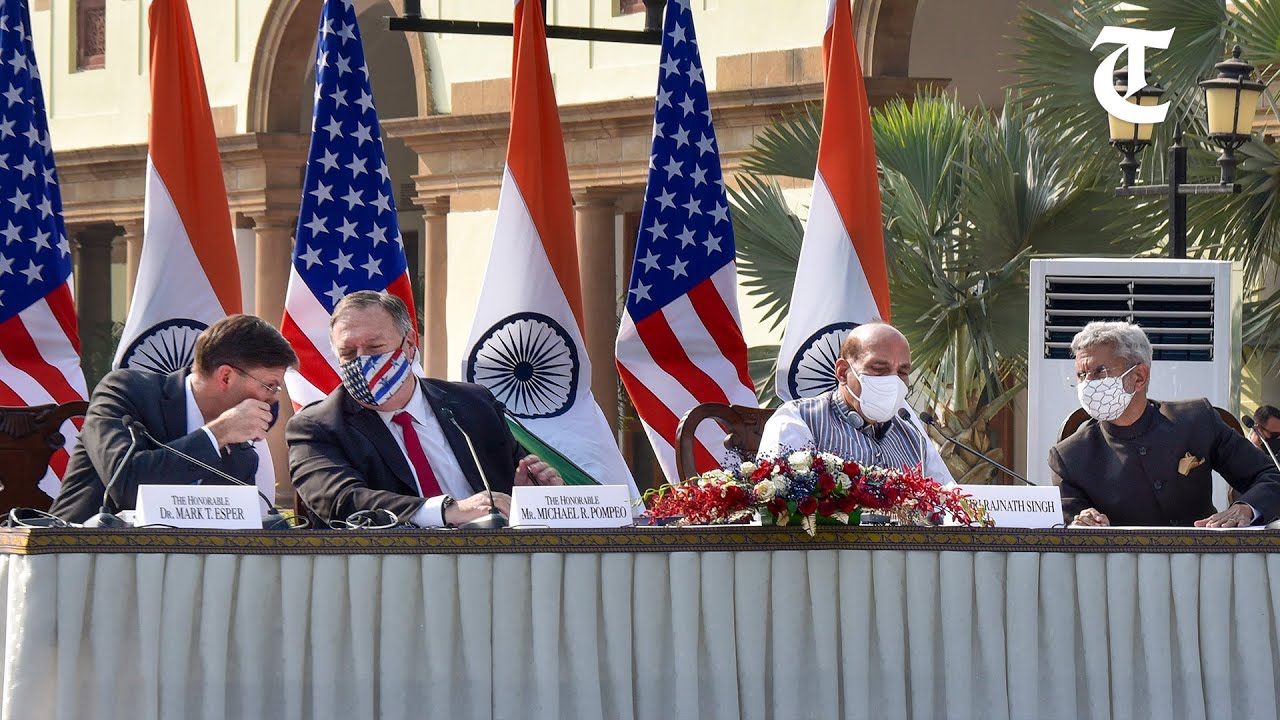 India and the US on Tuesday signed the Basic Exchange and Cooperation Agreement (BECA), a military pact reserved for close Pentagon allies, and resolved to undertake joint developmental and infra projects abroad to beat back Chinese aggression in the security and economic domains.

In a joint statement at the end of the third Indo-US 2 + 2, the four Ministers—Rajnath Singh, S Jaishankar, Mike Pompeo and Mark Esper — welcomed both the BECA and the move to enhance maritime information sharing and domain awareness.

The security side occupied centre-stage and dominated the joint statement, but the two sides also touched on a wide array of issues including greater partnerships in health, space, nuclear energy, supply chains, trade, people to people ties and energy where in a matter of years, the US has emerged as the fourth largest supplier to India.

The meeting took place barely a week before the US polls and a month before India and the US will be joined by Japan and Australia for a combined show of naval strength under the Malabar series of war games.

The four Ministers welcomed this Quad cooperation and resolved to impart economic content through a dialogue among the development organisations of the four countries.

A new India-US Counter-Narcotics Working Group will add to the partnerships in counter-terrorism and narco trafficking. The four Ministers emphasised the need for concerted action against all terrorist networks and called on Pakistan to bring to justice the perpetrators and planners of all attacks, including Mumbai, Uri and Pathankot.

The Ministers also committed to exchange of information about sanctions and designations against terrorists as well as countering radicalism and terrorist use of the internet.

Though Defence Minister Rajnath Singh hoped US defence companies would manufacture in India in tune with PM Modi’s call for Atmanirbhar Bharat, there was no reciprocation from the US side. Instead the joint statement spoke of fast-tracking discussions for identification and development of joint projects.

In health, India and the US are discussing an inter-Ministerial MoU to enhance cooperation as also a MoU between ICMR and US National Institute of Allergy and Infectious Diseases to collaborate on infectious diseases including Covid.

The joint statement devoted considerable space to the fine print of defence cooperation as well as formulations on South China Sea and the Indo-Pacific. The intention behind the Quad as well as consultations with countries on the fence such as Indonesia and Sri Lanka (the next stopovers for Pompeo) was to secure the “economic and security interests of all stakeholders having a legitimate interest in the region”.

India and the US also resolved to jointly build up the deterrence capacity of regional countries. One such is in the works after the US signed a defence framework pact with the Maldives which has extremely close defence ties with India.

The US said it was willing to accommodate the Indian desire to expand security ties with other US regional military commands such as the Central Command and Africa Command.

Another military agreement, the Communications, Compatibility and Security Agreement (COMCASA), that preceded BECA, has led to expansion of secure communications capabilities to include secure conversations between the Foreign and Defense Ministries.

The Ministers also referred to ongoing trade discussions which, however, have belied South Block’s expectations of a mini trade deal.

In energy, apart from a MoU on Strategic Petroleum Reserves (SPRs), the Ministers touched on a long-pending US project to set up nuclear power stations. Cyber governance and defence was another topic of discussion.

In a sign that the talks had gone well, the US said it looked forward to hosting the next 2+2 Ministerial in 2021.