Chandigarh: Union Home Minister Amit Shah will heat up the politics of Punjab. Shah is set to hold a rally in Patiala on January 29.

Patiala is the stronghold of former CM Captain Amarinder Singh. Captain recently joined the BJP. After the defeat in the assembly elections, it will also be a show of strength of the captain.

Pertinently, Rahul Gandhi is targeting the BJP in rallies. During his visit to Punjab, Gandhi has not targeted ruling Aam Aadmi Party rather attacking Prime Minister Narendra Modi-led Centre government. He is raising issues like wrong GST, demonetisation. Shah can counter Rahul’s claims during his rally. 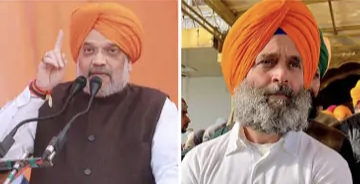 Amit Shah’s visit to Patiala is also being linked to the strength of the party. The BJP in Punjab has recently got the support of many veteran former Congress ministers besides Captain Amarinder Singh and Sunil Jakhar. In such a situation, he will also make a strategy to establish the party firmly in the whole of Punjab and perform well in the Lok Sabha elections.

There will also be brainstorming on strengthening the organization to the grassroots level and bringing leaders with a support base forward in the party.

The situation in Punjab is grim for the BJP ahead of the Lok Sabha elections next year. The reason for this is that the Akali Dal is no longer with them. The SAD has left the BJP on the farm reform laws due to this, the BJP will now contest all the 13 Lok Sabha seats in Punjab alone.

In such a situation, it is necessary to look for strong candidates from the party itself. Shah’s visit is also consider crucial for this reason.